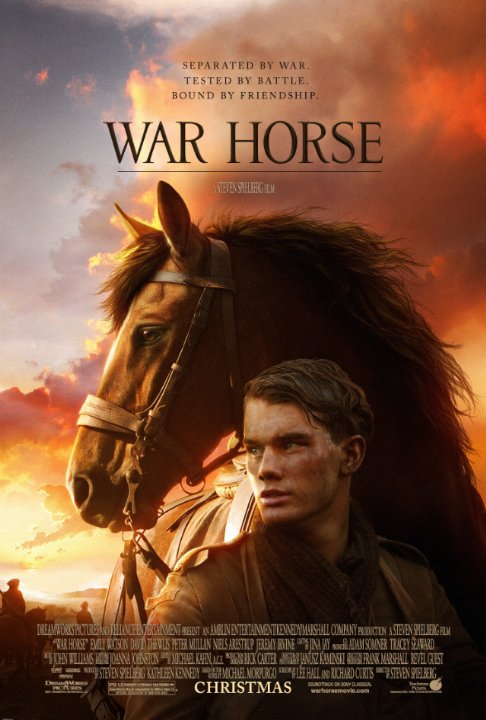 Plot: Albert is a young man who has developed a close bond with his horse, Joey. After Joey is conscripted to fight in WWI, Albert, despite being underage, enlists himself in order to make it to the trenches of France and save his friend. -- Chris Kavan

Bore Horse. I shut this one off 40 minutes in. The film plays like a lazy river drifting from one mundane plot point to the next. I was trying to hold out for something interesting. The film never really got going. The comedic elements that I think were meant to try and buoy this fell flat. BADLY. When a movie notes Stephen Spielberg with a producer credit I'm firmly in the belief it's no longer a good film. The 2010's are making this painfully clear.

With a war film like "Saving Private Ryan" under his belt, you would think Spielberg could make a movie that doesn't look like it was made for TV.

Wow this horse is amazing. Okay what did I think about this movie well I can say that it is the best movie of 2011, just a great film with a good score.

This is a pleasant family film in which every member of the family will find a piece they'll love most . The kids can dream about the adventurous part and the bond of friendship between a person and an animal . The women will be sobbing with all the sentimental and gooey stuff in this film while their handkerchief will get moister as the end nears . The tougher men of the family can set up for some authentic WWI footage.

The look and feel of this movie took me back to movies like "Old Yeller". It looks sometimes like a painting. I had the feeling that it was not always filmed outside . The storyline is much like Forrest Gump , only that this time a horse is the subject that runs through history and all sorts of situations. A comparison with Lassie is obvious cause Joey behaves like a …

Decent but not extraordinary.

Unsurprisingly for Spielberg, the movie was beautiful - the scenery, the animal(s) and the story without any gore and blood usual for such movies. But I couldn't care less for human characters as not a single one was long enough present on the screen. Maybe something was wrong with the script, when it couldn't make me feel something for the people in the movie. I certainly did care for the horse - the depiction of his sufferings was almost unendurable - so I expected more at the end of the movie, more emotions, more... something. Like Spielberg was told to be moderate in his outbursts of affection, but this is a wrong kind of movies to apply such advice. Lassie Come-Home wouldn't be so good family movie had we been to its characters so...indifferent.

Ted Narracott (Peter Mullan) purchases a horse instead of a plow animal. His son Albert (Jeremy Irvine) trains the horse and names it Joey. England is at war with Germany so his father sells it to a soldier named Captain Nicholls (Tom Hiddleston). Joey travels from one owner to another. Parts of the screenplay were engaging with lines such as âSome days are best forgotten.â âItâs good to be proud in doing something good.â âIt will never be over.â Spectacular cinematography and slight humor of the story was evident from the talented veteran director. Realism of the war scenes was impeccable. Only reservations this critic had were the lack of a likable character apart from the horse and the film slows down when it came to the grandfather and Emilieâs story. War …

Looks like it comes out next week. Haven't seen much on it. I know it premiered to good reviews but I don't have any hope for it.

This trailer could be one of the dumbest trailer I have ever seen. Looks like another Lassie/Marley and Me/Seabiscuit/Secretariat movie. You must have to love animals with all of your heart to enjoy this movie. To me, it looks pitiful, but hopefully I am surprised.