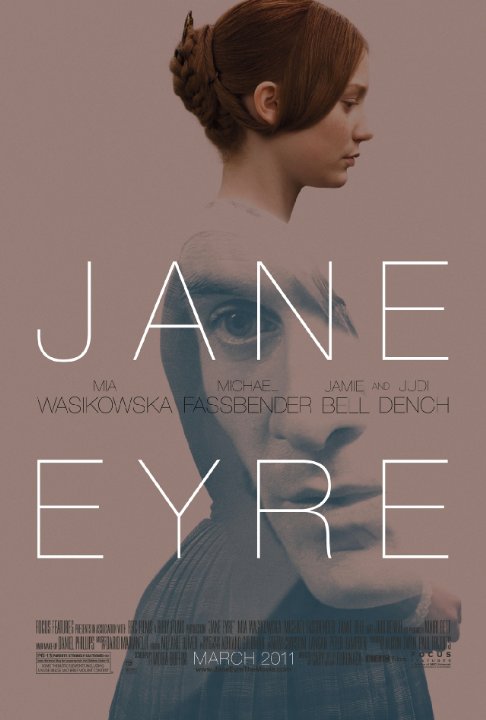 Plot: The latest adaptation of the Charlotte BrontÃ« classic: A governess rises above her childhood abuses to work at the Thornfield Hall where she bonds with the distant and dark master Mr. Rochester. A secret kept by Rochester threatens to destroy the relationship they have built together. -- Chris Kavan

In the spirit of the Charlotte BrontÃ« novel it's based on, this version of "Jane Eyre" is an absorbing period drama.

''Jane Eyre'', the 2011 adaptation of the classic novel by Charlotte Bronte, is a slightly flawed film, but it indeed a good film. Though it might be a little difficult for those who haven't read the novel, it is a very well-made film. Special praises should go to the production design, cinematography, score, and Mia Wasikowska's acting.

This is my all time favorite move rendition of Jane Eyre. I felt that it really captured the heart of the story and the characters (some things are changed and left out, but the story is not diminished in my opinion). I like how the story is told through flashbacks instead of just a chronological story. I love Michael Fassbender as Mr. Rochester and Judi Dench as Mrs. Fairfax. The scenery and music are just amazing. This is on my all time favorites list!

I started my Jane Eyre endeavor a couple months ago, when I was urged to watch the Orson Welles version. I absolutely fell in love with it. I really enjoyed the story and remembered another Jane Eyre had come out recently, so I figured, what the heck?! Michael Fassbender-- sign me up!
My take on this one is that it's probably a little truer to the novel as there was a storyline in this film that isn't in the Orson Welles version. I've never read the book, so don't quote me on that.
Mia Wasikowska was a great Jane Eyre. Michael Fassbender was a great Edward Rochester. Individually. The problem for me was that these two had zero chemistry. And that really put a damper on things. I found the movie to be a bit boring. The scenery was lovely. The performances were excellent. There was just …

The classic 1847 novel jumps off the screen in this delightful version that is at once scary and sweet. Told in flashback form, this "Jane Eyre" follows the orphan's travails as, despised by her aunt and eventually sent off to a charity girl's school, she puts up with horrible conditions, finally leaving to procure a job as a governess for wealthy Edward Rochester. But complications arise as she falls in love with him, only to be devastated when their marriage is prevented by a horrible secret, forcing her to take her future into her own hands and come to terms with her own past. This is a wonderful new interpretation of Charlotte Bronte's classic that alters the novel's structure but not the emotional impact of the characters or the scenarios. Mia Wasikowska is a perfect Jane Eyre -- …

No posts have been made on this movie yet. Be the first to start talking about Jane Eyre!