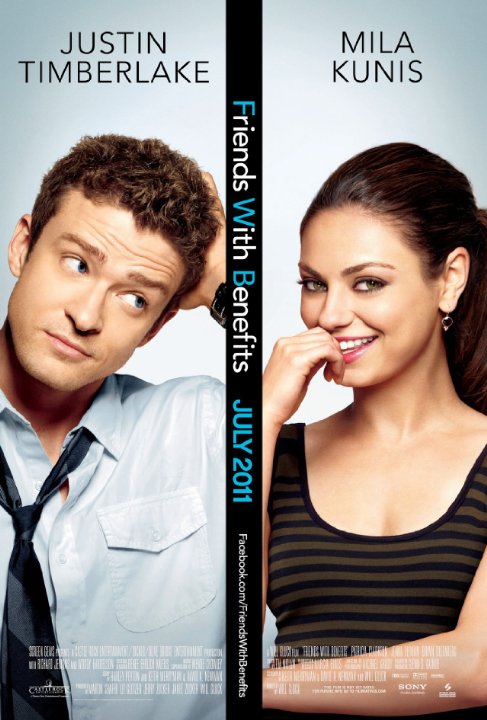 Plot: A long friendship is put to the test when the relationship turns physical. -- Chris Kavan

Despite some harsh reviews regrading it's predictability, I found Friends with Benefits to be an excellent combination of humor and romance. The cast is excellent, as is the script, and the movie is, overall, highly entertaining.

Better than the average romantic comedy movie thanks to the great chemistry between Timberlake and Kunis - and the supporting cast, including Woody Harrelson, Patricia Clarkson and Richard Jenkins is likewise good. A bit predictable, but still a lot of fun that exceeded my expectations.

This movie was a cute, fun, predictable Rom-Com. What made it good was the chemistry on screen between Justin Timerlake and Mila Kunis. That is really where is Romantic Comedy is made or broke. The movie No Strings Attached earlier this year was basically the same story line but Ashton Kutcher and Natalie Portman never clicked for me and I didn't really care about what happened to them and that brought the whole movie down. In this movie Justin and Mila made me stop thinking of them as Justin Timberlake and Mila Kunis and start caring about Jamie and Dylan.

The other thing that really brought this movie up a level were the small cameo/supporting characters in the movie. Opening up with Emma Stone and Andy Samberg as the two main characters boyfriend and girlfriend breaking up with …

"Friends with Benefits" By Nosferatu

This movie is definitely going to my Top Romances. âFriends With Benefitsâ has got everything a romantic comedy should have: itâs funny, different, entertaining and itâs all about the love and misfortune of two people.

This is a very good movie with a simple storyline about a couple trying to be just friends (with benefits) but, as they get to know each other better and better, being just friends starts getting harder and harder.

Justin Timberlake is revealing himself to be a better actor than he was a singer, although I like his work as a singer too. Either heâs having a lot of luck in the movies heâs getting or heâs actually good, or both. I also loved him in "The Social Network".

In my overall opinion, "Friends with Benefits" is one of the best romantic comedies …

No posts have been made on this movie yet. Be the first to start talking about Friends with Benefits!