The Kids Are All Right Movie Information 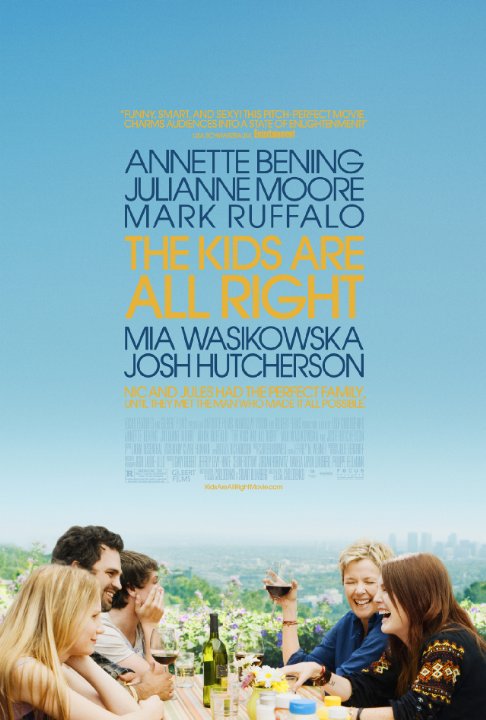 Plot: Two children conceived through artificial insemination decide to track down their donor father and when they find him, their family, and two mothers, will never be the same. -- Chris Kavan

"The Kids Are All Right" is a well rounded comedy-drama combining humor with understandable, realistic characters.

Two children conceived through artificial insemination decide to track down their donor father and when they find him, their family, and two mothers, will never be the same. This movie has great acting and good ending.

While the story is overly sentimental for my tastes - the characters are really well acted - especially from Mark Ruffalo and Annette Bening. Mia Wasilkowska, Julianne Moore and Josh Hutcherson round out the great cast. The movies is too feel-good for me (and I am surprised it made the Oscar list that year) but overall, it is worth it for the standout performances.

The Kids Are All Right review

Nic (Annette Bening) and Jules (Julianne Moore) are a couple living with kids namely Laser (Josh Hutcherson) and Joni (Mia Wasikowska). Because of Joniâs curiosity, she contacts the sperm bank and dicovers that Paul (Mark Ruffalo) is the responsible donor to her parents. Fantastic performances especially from Bening and Moore were on display. Screenplay was smart with the following quotes: Jules â âSometimes you hurt the ones you love the most.â ââ¦you're together for so long, that you just... You stop seeing the other person. You just see weird projections of your own junk. Instead of talking to each other, you go off the rails and act grubby and make stupid choices.â Paul â âIt's hard enough to open your heart in this world. Don't make it harder.â Soundtrack …

Sploich Reviews The Kids Are All Right (2010)

I'm pretty big on the Oscars. This is pretty obvious, I suppose. You have no idea how much time and effort I have put into the Oscars section of my website. When I hear about a movie that people believe is going to show up at the Oscars, I typically hunt it down and see it as soon as possible. This was the case back in July of 2010 when I heard that the film The Kids Are All Right was playing near me. Since I saw this film I think I have alienated a lot of my friends with my incessant complaining about how much I despised and loathed every inch of this movie, and now here I am to share the pain with my readers.

What we have is a family consisting of two mothers, a son and a daughter. The children have for some time been wondering who their donor father is and so one day when she is of …

No Oscar film but good for a laugh

I have no idea why this movie is being nominated for Oscars. It's funny, yes, very funny, and an interesting (if typically Hollywood) portrait of an alternative family, but the acting is not anything to write home about, especially in comparison to some of the real knockout performances this year, and if anything, Julianne Moore should be nommed over Annette Benning, as she had the more challenging character, IMO. Benning's character is no piece of cake either, but I felt that she was shrill and unlikable, and she should have redeemed the role or else why should we care if their marriage works out when the male character makes Moore so much happier? Mark Ruffalo does what he can with a ridiculous role. Some girl from America's Next Top Model shows up. Characters are ludicrously bitchy or …

No posts have been made on this movie yet. Be the first to start talking about The Kids Are All Right!