The Next Three Days Movie Information 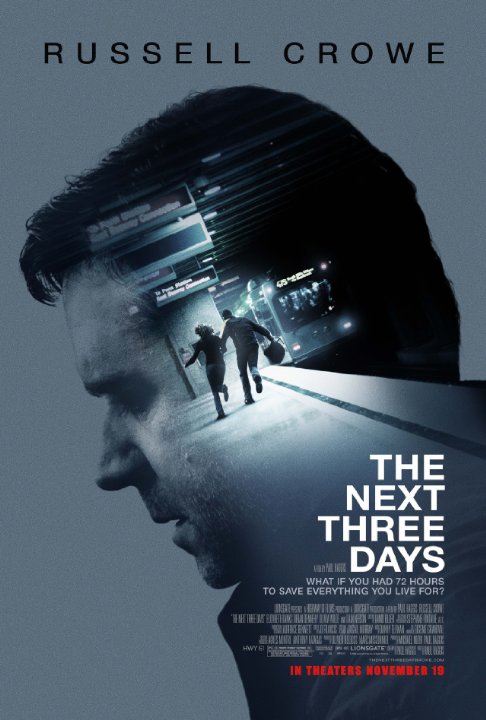 Plot: A married couple's life is turned upside down when the wife is arrested for a murder she claims she did not commit. When her last appeal is turned down, the wife becomes suicidal, and the husband tries to break her out of prison. The Next Three Days is the remake of the 2007 French film Pour Elle.

While it has a few thrilling moments, it becomes, not really clunky, but very unenticing.

It was nice to see Neeson and Crowe in a film together. Elizabeth Banks was okay here. An unbelievable plot made interesting because of the directing and performances. Its intent was good but the manner of saving his wife was unrealistic. If only the conclusion was improved, this could have been rated higher. The Next Three Days is flick with a nice premise but just too much to digest.

Wow! yet another Russell Crowe movie i really liked. Another actor who much like everything done by George Clooney i consider boring. Since seeing Cinderella Man, A Beuatiful Mind and a few others i have really taken a liking to Crowe. Director Paul Haggis who have brought us such greats Million Dollar Baby(writer) Casino Royale (Screenplay) and last but not least The Valley Of Elah (director,writer) brings us the tale of one man's roller coaster of a ride to keep his family intact. Crowe play John Brennan a university teacher who live with his wife Lara(played brillaintly by Elizabeth Banks) and their only son Luke (played by twin actors Tobey and Tyler Green).

After being wrongfully accused of murdering her boss, Lara is sent to prison leaving young Luke and John to fend for …

"The Next Three Days" by Yojimbo

A schoolteacher's wife is imprisoned for first degree murder based upon circumstantial evidence and when the final appeal fails and she resorts to a suicide attempt he pours all his skills as a researcher into engineering a meticulous plan to break her out. Very much in a similar vein to TV series Prison Break, The Next Three Days has the premise of an ordinary and honest man resorting to extreme measures when faced with an untenable situation. It's not as convoluted as the series however, concentrating more on the human drama than histrionics; in fact the inevitable mix of wobbly-cammed screeching tires, helicopters and cop dodging is easily the least interesting part of the film. Some will be disappointed at the lack of action, especially considering the trailer which was clearly cut …

No posts have been made on this movie yet. Be the first to start talking about The Next Three Days!