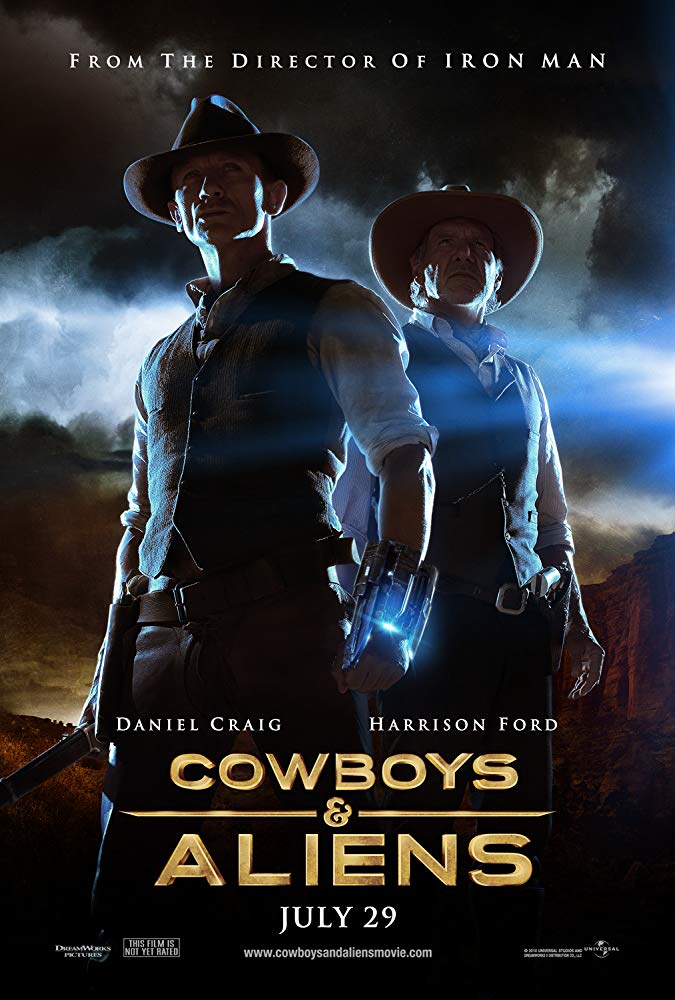 Plot: In 1873 a lone stranger finds himself in the town of Absolution in the Arizona Territory. With no memory and a shackle on his wrist, he finds strangers are not welcome, especially by the touch-as-nails town leader, Colonel Dolarhyde. Yet the town will soon be beset by invaders from the sky and the lone stranger holds to key to survival. -- Chris Kavan

It was a alright movie.

An outlaw (Daniel Craig) with a weapon on his wrist is a stranger in a town. He meets Colonel Woodrow Dolarhyde (Harrison Ford) to battle the aliens. Soundtrack and screenplay were descent. The battles and locations were wonderful. If only better character development, storytelling and origins of the aliens were delved into. Acting was solid and believable as well. Cowboys & Aliens is a pleasant mix of two film genre's filled with action sequences that is unique despite the lack of a better plot.

Coming back to his town knowing nothing about himself, Jake Lonergan, accused of criminal acts including murdering a woman, has to find answers to his and people's question. Mysteries connected to an alien invasion on their town. *** Western plus aliens in one film is really awesome! Very good concept, and great combination. The film executed a good concept well. The good thing about this film is that it holds your interest all through out. The mystery of what those extraterrestrial creatures want while discovering the antagonist's life. VERY GOOD CONCEPT. RECOMMENDED!

I actually liked this. I found the concept extremely interesting, I had no idea what to expect from combining two polar opposite genres, the Western and Sci-fi, but overall, this worked I thought. This film is much more Western than Sci-Fi, and I think that one of the best things about it. The characters, story, setting, scenery, cinematography, dialogue...it's all very western, which I really liked. Aliens capture some civilians, and some citizens go to the rescue. It's simple and it worked. The characters are completely likable, and the cast is brilliant, all giving good performances. Daniel Craig, Harrison Ford, Sam Rockwell, Paul Dano, Olivia Wilde...they were all excellently cast, and they deliver! The cinematography and costumes were good. And the special effects were good! So …

An outlaw with total amnesia teams up with the local townsfolk, his old gang and the last surviving members of an Apache tribe to rescue their people stolen away by body snatching aliens. I have to say that the little kid inside of me loved the idea of matching six gun toting outlaws against flying saucers and the set up to Cowboys & Aliens actually lives up to the idea really well. Daniel Craig makes an extremely charismatic tough guy with no name and the opening scenes as he tries to discover what happened to him are great. It does lose its way a little as the aliens creep more and more into the story but it throws itself into the preposterous premise with such abandon you can't help but get carried away by its sheer enthusiasm. It would have been a more satisfying experience if we'd …

Not since the series, âThe Wild, Wild Westâ (Robert Conrad) of the late 60âs has there been a solid Hollywood attempt to mix the standard cowboy western with something approaching science fiction. âCowboys & Aliensâ makes a solid effort with this cross-genre action picture. Played as a straight up western from the start, the film manages to stay true to those roots throughout most of the story.

Directed by Jon Favreau (âIron Manâ, âIron Man 2â), âCowboys & Aliensâ has the look and feel of a stock western movie, complete with enigmatic drifter, an overbearing cattle baron, and a puppet sheriff. Writers Roberto Orci and Alex Kurtzman (both with previous writing credits for TVâs sci-fi series, âFringeâ) crafted a script that quickly lays out the main …

No posts have been made on this movie yet. Be the first to start talking about Cowboys & Aliens!