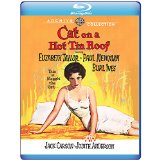 Plot: A drunk man, who hurt himself hurtling on his old high school track, has a lack-luster marriage and a father, that he doesn't really know, who is about to die. -- sapien

The stylish production and lead performances are magnificent in every way, but theatrephiles might feel umbrage at the sanitizing of the original play's more racy themes. Williams certainly did.

Although the adaptation rewrites a lot of the play's more controversial themes, it is still an intense and sometimes gutwrenching family drama. The writing is strong, but mostly because of the strength of the source material, which births many memorable one-liners and brilliant scenes of differing motivations squaring off. The real star, though, is the acting, as the great Paul Newman and Elizabeth Taylor breathe life into Tennessee Williams's characters and find the depth of emotion behind the words. The effect is a film that feels like it breezes by - that's how strong and interesting the plot and characters are.

This was a really good movie. Like all Paul Newman, and Tennessee Williams movies this one is full of great dialogue. The plot is great. The one-liners are great. The acting is great. In short, the movie is great! Burl Ives is hilarious in the movie, in my opinion.

No posts have been made on this movie yet. Be the first to start talking about Cat on a Hot Tin Roof!