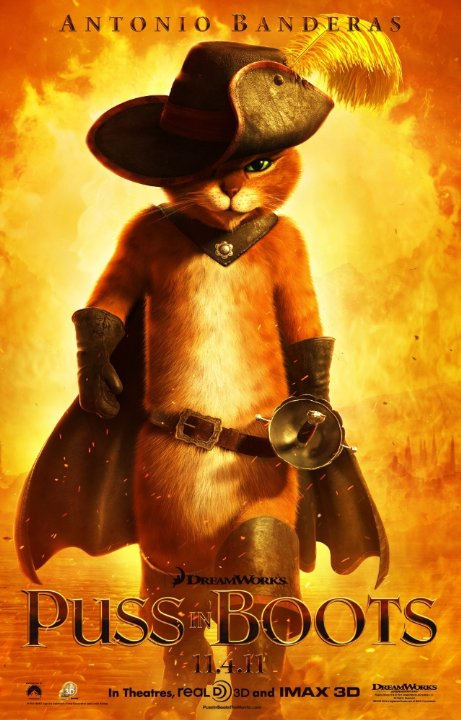 Plot: Follows the adventures of the swashbuckling Puss in Boots before he met up with Shrek and crew. -- Chris Kavan

A good rival animated film to its counterpart "Shrek."

Puss in boots is a okay movie, the 3-D in this film but the film is funny in some places and that's good for me.

A rousing fantasy adventure. The action and humor are well balanced. I like how the story incorporates various fairy tale characters. The animation is also very striking and detailed. Entertaining for all ages.

Chris Millerâs Puss in Boots is a wholesome pack for funny moments to cherish reminding the old rhyme character humpty dumpty and also bringing back the best character missed from Shrek. Always when Dream works bring a movie on to the big screen it is the time to celebrate. Puss in boots delivers the goods. The elements of the movie like lengthy chase scene in a chariot run by red eyed pigs and a giant tree that unleashes its green leaves with glimpses of romantic interlude and oncoming danger is all submerged to give fun. The plot is imaginary and strictly those who believe in fairy tales can consider it even. The action part was having its own share of novelty and cleverness. Chris Miller with his previous movies like Shrek and Madagascar has proved he would not make any mistake in …

The story begins with our titular hero (Antonio Banderas), Puss returning to the town where he grew up as an abandoned kitten left at the doorstep of an orphanage in the Mexican town of San Ricardo. Puss is looking for work. Intrigued by rumors of some Magic Beans and the Goose that laid the Golden Egg, Puss looks to steal the beans from the dastardly duo Jack and Jill (Billy Bob Thornton and Amy Sedaris) but not before bumping into sultry seductress/thief Kitty Softpaws (Salma Hayek) and former best friend Humpty Dumpty (Zach Galifianakis). The three then forge a shaky alliance and hatch a plan to steal the beans, plant the stalk and make their way to the castle in the sky to find a gold-laying goose by climbing up the giant beanstalk.

What I liked: the cartoon dance fight that had …

Review of Puss In Boots

Let me start off this review by pointing out two very important background notes: First, although I enjoyed the Shrek franchise in general ---and more particularly the first film, since the sequels seemed to lose their charm, as sequels almost always tend to do---one of my least favorite characters in the mix was Puss in Boots. Dress him in any costume youâd like, Antonio Banderas is pretty unlikely to sweep me off my feet. And second, I am, in no uncertain terms, NOT a fan of cats in general. The ones in my neighborhood clearly have an unwritten understanding that my landscaping is the perfect community liter box, and donât get me started on how aloof they areâgive me a slobbering, eager to please dog any day over a cat. Howâs that for endearing myself to the cat loverâs …

No posts have been made on this movie yet. Be the first to start talking about Puss in Boots!