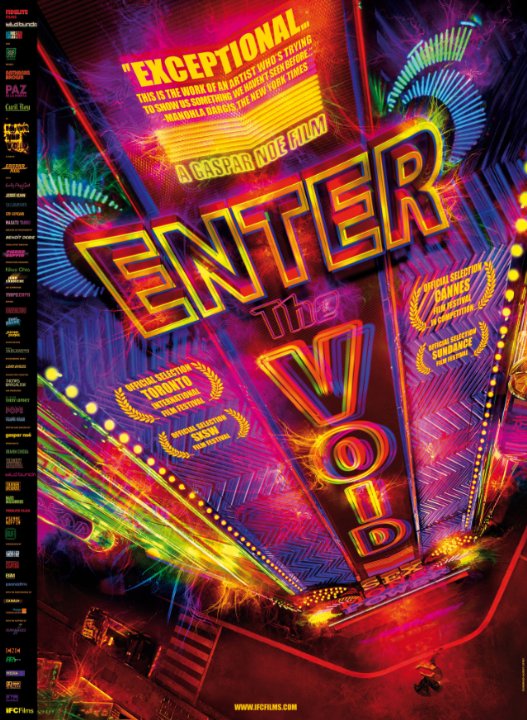 Plot: Told out of joint, this film explores the relationship of a brother in sister as they relocate to Japan after their parents car accident. He finds work as a drug dealer, while his sister is pulled into the red-light district. Even after he dies, he watches over her. -- Chris Kavan

An often bleak story surrounded by bright visuals, "Enter the Void" is a slow moving, highly accessible art-film set inside a fitting underworld of sorts.

Visually striking but the narrative is pretty slow, despite the fact it delves into past, present and future. This is one strange trip, and not everyone will appreciate it, but if you're looking for something different, I can't think of anything to compare this one to.

i would love to see a real film (with acceptable story) directed by NoÃ©,it could be good

"Basically, when you die your spirit leaves your body, actually at first you can see all your life, like reflected in a magic mirror. Then you start floating like a ghost, you can see anything happening around you, you can hear everything but you can't communicate. Then you see lights, lights of all different colours, these lights are the doors that pull you into other planes of existence, but most people actually like this world so much, that they don't want to be taken away, so the whole thing turns into a bad trip, and the only way out is to get reincarnated." - Alex. A creative picture that reminded me of disturbing 2001: Space Odyssey, Tree of Life, Mulholland Drive and Diving Belll Fight Club and the Butterfly, The ( Scaphandre et le papillon, Le) but with a less fulfilling …

Despite being quite viscerally disturbing at times, a weak script, and occasionally bad acting. Enter the Void is among the most remarkable visual experiences I've seen in a film... ever. Colorful, emotional, affecting, bizarre, unsettling, and completely insane, director Gaspar Noe has flirts with genius but is damaged by an occasionally dragging visual narrative. The camera moves in ways virtually impossible at times (sometimes aided by CGI) and every moment of the film you can feel the Director's careful touch upon each aspect of the visual. Noe's goal has always been to deeply affect his viewers, in this aspect he does not fail at all. He shows the core of our tragic characters issues and then (like the title) we enter the void that they are falling into because of their …

CineFixâs 100 Most Talked About Movies by Manuel Josh Rivera

No posts have been made on this movie yet. Be the first to start talking about Enter the Void!