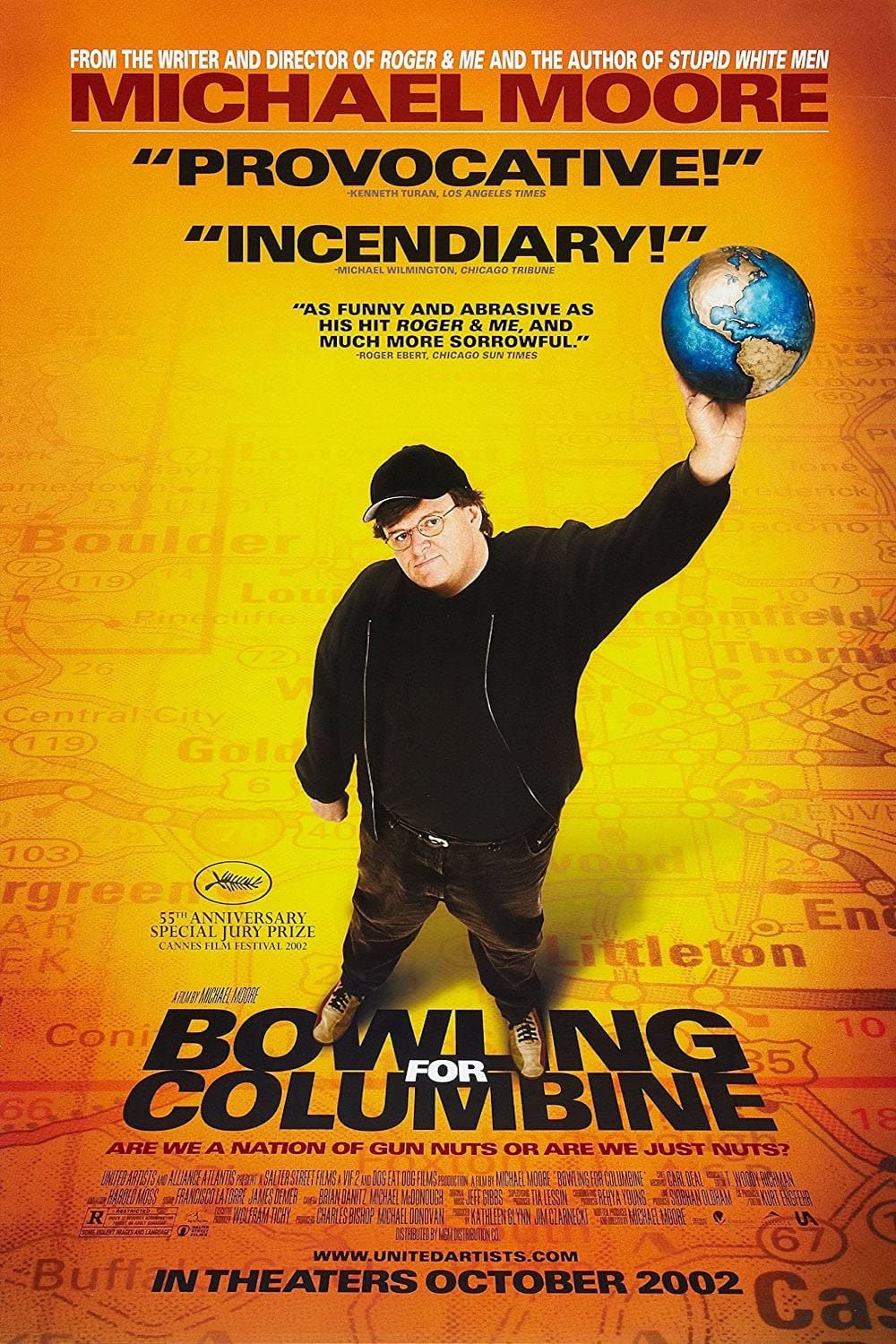 Plot: Gun Violence in America is shown as Michael Moore looks for causes and answers from some of America's top opponents of gun control.

I realize that a lot of this documentary was trying too hard at times to dramatize what was happening in order to keep an audience entertained. However, the questions brought up about why Americans are so trigger happy compared to other countries really stick with people because those are the questions that are still unanswered.

Despite the way that Michael Moore brashly manipulates fact and editing to create sensationalist moments in his documentaries, Bowling for Columbine is his best work. The values and sentiments that Moore puts forth are clearly close to his heart and he raises a lot of good and thought-provoking questions.

Sure, it's slanted in the way only Michael Moore can spin things, but it's still full of wit, wisdom and some downright scary implications. Just don't bring it to the next NRA meeting, for your own safety.

Michael Moore: "If you were to talk directly to the kids at Columbine or the people in that community, what would you say to them if they were here right now?"

Marilyn Manson: "I wouldn't say a single word to them I would listen to what they have to say, and that's what no one did".

Bowling for Columbine is a documentary about the gun Violence in America is shown as Michael Moore looks for causes and answers from some of America's top opponents of gun control.

Bowling For Columbine is one of best documentary's I've seen in a while. It's both unique and interesting with it's powerful look on gun violence in america and the Columbine shooting back in 1999. All this is shown in different type of tones, you got a brilliant sense of humor, a strong statement and the truth. …

MIchael Moore's best documentary film which in light of recent events such as Sandy Hook, Trayvon Martin, Aurora, and so many other horrible shooting incidents have only made it so much more important since its initial release.
What is most interesting about "Bowling For Columbine" is that despite its obvious political agenda (GUN CONTROL!) which Moore himself is open about from the beginning, the movie does not find any easy solution(s) to the situation. He examines the role played by not only the gun industry but also the media, big business, political activism, high school drama, and psychological phenomena play when it comes to gun violence in America.
If there is one thing that I opposed in "Bowling for Columbine", it was the way that Moore conducted his interview with Charlton …

The figure of 11,127 is a staggering stat that would be discussed within the insightful documentary. Michael Moore expresses his background in Michigan, Charlton Heston, Matt Stone, Chris Rock, Marlyn Manson, Colorado and the adverse effects of violence from guns from a myriad of personalities. The people who carry guns mentioned: "Were just concerned citizens." "There are wacko's out there." "If we won't protect our family who will?" Wait until the song It's a Wonderful World comes up for te documented figures of assassinations, murders and funding. The unfortunate gruesome shooting at the Columbine High School, showing footage's of scared students and panicky students calling 911. The 2 responsible have murdered 12 students and 1 teacher because of a legally bought weaponry and …

No posts have been made on this movie yet. Be the first to start talking about Bowling for Columbine!