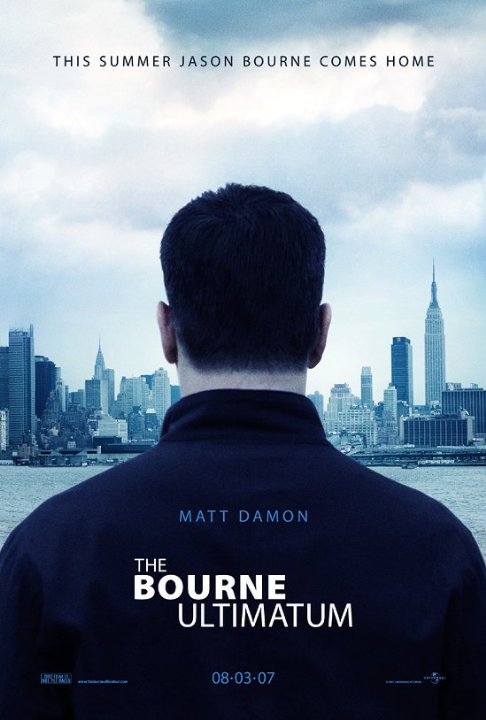 Plot: The latest showdown for the Bourne Series. Bourne will fight the past in order to make his future free from it.

Matt Damon will be reborn in the next movie. the Bourne ultimatum. Okay this is going to be a another short review so let's go.the movie has good action scene and good directing.

The final installment in the Matt Damon-helmed portion of the Bourne franchise is efficiently-directed by Paul Greengrass, resulting in a more brutal and straightforward tale of revenge. The action sequences are top-notch, but Matt Damon continues to be the heart of the series - finding the line between passion and cold-blood.

Best of the series. The most thrilling and satisfying of the three.

Psychogenic amnesiac and former CIA assassin Jason Bourne (Matt Damon) escapes from Moscow officials and is being tracked down by CIA Director Ezra Kramer (Scott Glenn) sends Pamela Landy (Joan Allen). Nicky Parsons (Julia Stiles), a former Treadstone support technician assists Bourne from the CIA. Landy informs Jason that she never signed up for Treadstone and Blackbriar and that she is helping him as well. A few reservations this reviewer had were the complications at times with the plot since it was the third installment from the franchise, the other would be the believability of some action sequences jumping from high places without any dislocated bones while dodging bullets and the wobbly camera direction that was a bit overdone. Compared to the first two films, this definitely …

"The Bourne Ultimatum" by Yojimbo

The final installment of the Bourne franchise sees Matt Damon finally discovering who he is and who's behind this fine mess he's in. I must admit, I found this film an odd one. The usual formula of a thriller involves the story being set up for the first two thirds of the film, and the last half hour climaxes with a frenetic action set piece. In The Bourne Ultimatum, it's the other way round! The first hour and a half is more of Greengrass' wobbly cam following an earnest looking Damon as he runs through interchangeable corridors, chases down generic bad guys and speeds through traffic. There is literally no plot til the last half hour. It reminded me of The Matrix trilogy in that the second film seemed irrelevant, and the two sequels could easily have been compressed into one superior …

The Bourne Ultimatum is a high energy, fun filled time that is a step above most of hollywood THIRD installments. With a Director like Paul Greengrass on this project, you know you're in for fast paced entertainment (and shaky camera work), he delivers again here. A nice screenplay such as the one here is another added plus. This film is filled with Outstanding, Eye Popping Fight Scenes and Intensity to boot. Matt Damon is first rate (as always). Joan Allen and David Straithern are both terrific in supporting roles and Julia Stiles is given more to do this time around and she offers a pretty good performance as well. Albert Finney in a very small role, is good. This film is a delight to watch and it will keep you glued to the screen all the way through. The "Bourne" franchise is still …

No posts have been made on this movie yet. Be the first to start talking about The Bourne Ultimatum!