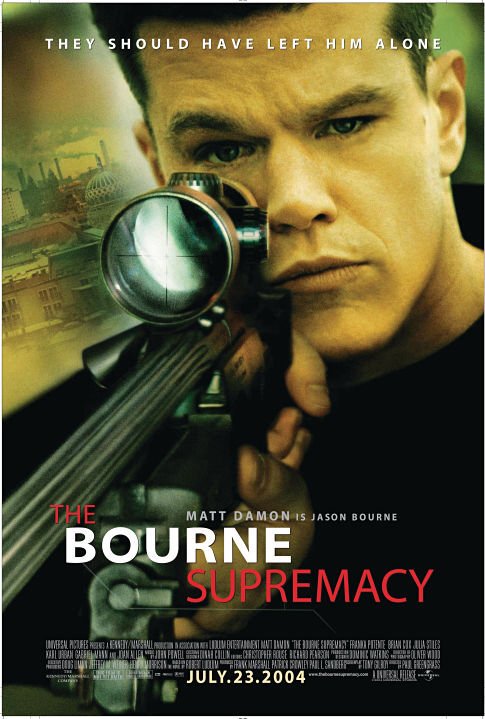 Plot: Jason Bourne is forced to assume his former life as an assassin after being framed for a botched CIA operation.

Matt Damon was born to kick-ass. the Bourne Supremacy. Jason Bourne is forced to assume his former life as an assassin after being framed for a botched CIA operation. Okay this is going to be a short review for this movie so let's go.the action is breath taking and the writing is well done.

The forgetful superspook trots the world again when he is framed for the death of two agents and sees his girlfriend killed by one of the conspirators leading him to go on the shaky-cammed warpath. All the grittiness and character dynamics of the original are replaced by the inevitable flashy car chases and shoot outs, leaving no room whatsoever for character development or emotional drama. It's all very slick but completely superficial and the constant fast cuts and wobbly camerawork ended up making me feel seasick. If you want depth, forget it. If you want slickly entertaining but brainless popcorn entertainment, look no further. It's got brainless in spades.

Like most sequels, the second Bourne film is a bridge between the inventive first film and brutal third. What it does well is maintain the frenetic and paranoid pace of the franchise that places the audience in the hero's shoes and injects even the most simple scene with a high level of tension. Entertaining from start to finish.

Better Than The First

There is one thing I appreciate about The Bourne movies more then anything else about them. And that is that they exist not only to make money, but to be a good movie. There are a lot of action franchises, such as Pirates of the Caribbean and Sherlock Holmes, that only exist to make money. They can be entertaining, but there's not a lot of thought put into them. The Bourne series tries to be a good movie, and they, for the most part, succeed.

Of course, the two films I've seen thus far in the trilogy have not been without flaws. Far from it really. But they are entertaining, at the bare minimum, they have a plot, and well-defined characters. The Bourne Supermacy, like it's predecessor is not perfect, but it's trying.

The Bourne Supremacy still contains the key plot elements from …

Jason Bourne (Matt Damon) and his girlfriend Marie Kreutz (Franka Potente) reside in India. CIA Deputy Director Pamela Landy (Joan Allen) runs a "buy operation", spending $3 million to purchase evidence exposing the mole within the agency who stole $20 million in allocation money seven years prior. Pamela questions Deputy Director Ward Abbott (Brian Cox) about "Operation Treadstone," the elite squad of covert CIA assassins in which Bourne was enlisted. It lacks a suitable antagonist to Bourneâs expertise, the killing of Marie was disappointing and the overall pace of the film is the worse from the franchise. Direction was decent and soundtrack apt for the scenes. It doesnât however show a humane personality of Bourne, which he only proved at the final sequences of the picture. …

A lot of folks were turned off by this installment's unstable camera technique. I thought it was another dash of brilliance because it matches the film's kinetic storyline. Matt Damon is back as Jason Bourne, angrier and more astute as ever. While this film serves as the transition between the (brilliant) first to the (magnificient) third installment, this one deserves some merit. If I had to pick which one is the weakest of the three, this would be it. Nonethless, it's a four-star film because it managed to progress the story, find a decent footing regarding its tone, and the action sequences are bigger, more exciting. The classic, really complex car chase scene near the end of the film is nothing short of perfection. I felt like I was right there next to Jason Bourne. This entire …

No posts have been made on this movie yet. Be the first to start talking about The Bourne Supremacy!