The House of the Devil Movie Information 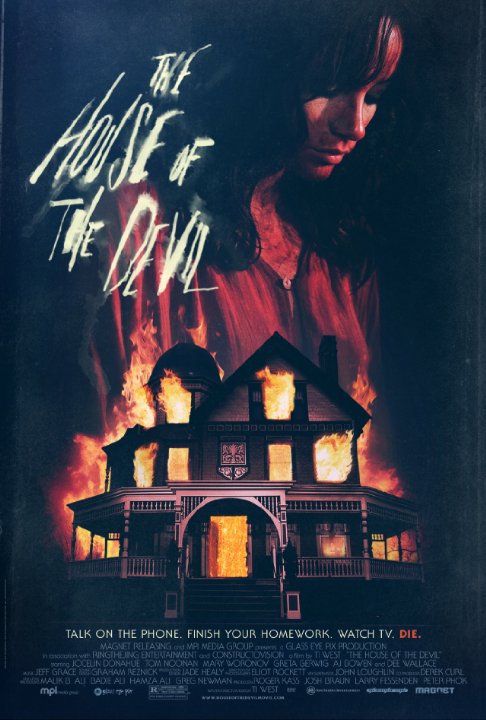 Plot: In the early 1980s, Sam, a young co-ed, looks to make some extra cash for an apartment of her own by picking up a babysitting job. When an elderly couple promises to pay Sam a substantial sum for one evening's work, the job seems just what she's looking for. But what about that lunar eclipse everyone keeps talking about? And isn't the house awfully far down that lonely country road in the woods? And how is it such an old couple needs a babysitter anyway...?

"The House of the Devil" starts out deliciously retro, but its tension goes slack barely halfway through, all before a finale that's equal parts terrifying and rote.

I liked everything about it from a technical standpoint, especially the way it looks and feels exactly like an 80's flick. I was drawn into it by the slow pace and more than halfway through it felt like it was setting up for some major suspense, but I didn't get that suspense. In fact, there wasn't much of a third act. The lack of a good payoff, after all that time spent waiting, was disappointing. It just stinks that I found it underwhelming, because it's such a well made film in all the other aspects.

I like Ti West's style of story telling. He tends to build up his characters and, some would say, that that makes the film slowly paced. That's true, the film is slow and studious. House of the Devil doesn't actually start becoming a horror film until around thirty minutes in, after which you get to know the characters that will be playing a large part in the film. I actually like "Kill List" better, it's West's second directorial movie and it's really good. My only problem was that the movie ended too soon, leaving the audience their own ending. I give this one 3 out 4 stars.

The House of the Devil - Movie Review

How many times have you heard people praise movies or TV shows just based on it's 80's theme and it's nostalgic references. It's happening all the time now.

The list goes on, but I don't want to be here all day. Yeah, it's cool seeing this film or music from the 80's there as the scene plays out. But why do I have this feeling that it's only there because the creator or director wants it there just because he likes that movie or song. The same goes with the setting and the feel that I think is missing in these homages. It just doesn't feel like it's the 80's, even if you throw in the endless references and throw backs.

The House of the Devil

Now, this one was a real treat. I saw the dvd box for this about two years ago and I never forgot it, I don't know why, but I wanted to see since then. Oddly enough, I never once read up on it, so once I had the opportunity to watch I went into it with absolutely no clue what to expect...at all.

I had no idea that it was going to be "Grindhouse-esque" film, emulating the look and storytelling of films of its era, and in all honesty, as far as that aspect is concerned it is nothing short of perfect, the look especially gets it better than Rodriguez and Tarantino. If I was shown a scene from this movie and wasn't told what year it was released, I could have very well guessed that it came out around '83, and I could almost always tell if it's authentic. It gets the look of early 80s …

Movies For The Perfect Halloween by dukeakasmudge

No posts have been made on this movie yet. Be the first to start talking about The House of the Devil!