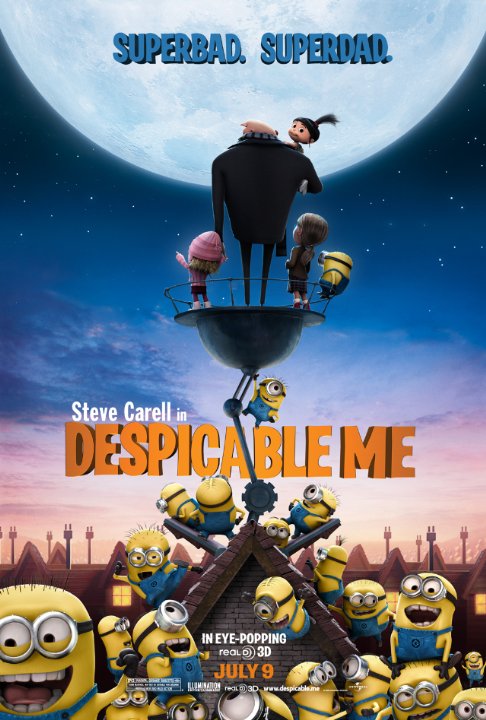 Plot: The truly despicable Gru is used to getting what he wants and now he has his sights set on the moon. Trouble arises for his plan when a trio of orphan girls disrupts his life. -- Chris Kavan

As touching as it is funny, it's one of the sweetest animated films made in years.

The main character (Gru) is truly despicable, he used to getting what he wants and now he has his sights set on the moon. Trouble arises for his plan when a trio of orphan girls disrupts his life. The minions in this movie needs a spin-off, I mean those yellow guys crack me up so much. The animation is good and the voice acting in the movie is good.

Not the best animated feature to come out in 2010, but it's certainly the cutest. Despicable Me features some amazing voice talent and lovable characters.

One of my animated faves!

Thanks to my daughter's fantastic navigation skills when it comes to finding things to watch on our pvr I got to see one of my all time favorite animated films for the 5th time. Despicable Me is one of those animated films that I get dragged to (literally) by my kids and end up enjoying it either more or just as much as they did. Our chief antagonist in the film Gru (Voiced by the always great Steve Carell) has his pride as a super thief and all around bad guy, hurt when he finds out that someone else has actually stolen The Great Pyramid Of Giza... Gru decides to out thief this guy and go after stealing the moon. He notices that his nemesis Vector has begotten the ability to steal the wonders of the world due to the fact he has manufactured his own shrink ray gun, which shrinks things …

I went in with pretty modest expectations since I've seen two computer animated films that managed to wow me this year, namingly of course How to Train Your Dragon and Toy Story 3. Does this film live up to either? Well not really in my opinion, but that's hardly meant to beaknock on the filmat all. Obviously the film follows Dr. Gru in his attempts to outdo the Vector guy you may have seen from the previews by stealing the moon, and the story basically plays out to that plot without much deviance. It's not a very original film obviously per se, but it does have enough talent and humor to keep things from getting boring. As you might guess from Gru's plot, the film does have some Looney Toons influence to it, including many gags that would fit easily within said subject matter. It also …

Despicable? Me! No - Great Animated Fun

It seems live action is out and animation is in this summer. After the emotional punch of Toy Story 3 - Despicable Me comes along to deliver another hefty blow. While I think Toy Story 3 played heavily on nostalgia for audiences who remember the first two, and gave them a great end, Despicable Me goes back to the basics - comedy, fun and enough heart to make it stick.

You start with a good animated movie by having a good vocal cast, and Despicable Me does not disappoint. Steve Carell, with his Eastern-European accent, sounds great as Gru. Jason Segel as his arch-nemesis Vector is a nerdy delight. The trio of orphans, Miranda Cosgrove, Dana Gaier and Elsie Fisher are also sell played - Fisher as the youngest orphan Agnes, steals just about every scene she's in.

No posts have been made on this movie yet. Be the first to start talking about Despicable Me!