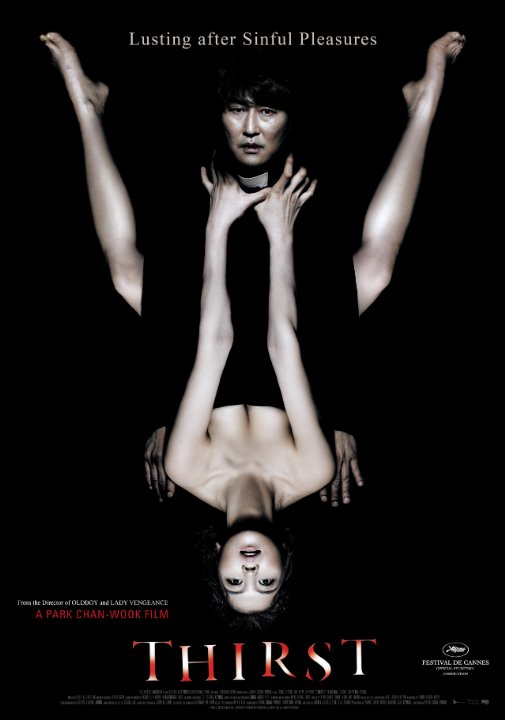 Plot: A priest takes part in a medicinal experiment with the purpose of creating a vaccine to a deadly virus, but something goes wrong and the priest becomes a vampire. Now the battle for his soul begins as he is torn between beeing a priest and the temptations of the night. -- Tjommi

This movie makes Twilight look weak. The movie is about a priest whose life takes a turn for the worst after he participates in a medical experiment to find a cure for a deadly disease. Am really not a fan on vampires movies. some times I find a good vampire movies, but most of the time I find really bad ones like twilight and Dracula 2000. Until a found this movie on a film channel at 2 o'clock in the morning, and that movie is thirst. I really liked the tone of this movie and the way it was shot.

So it starts out as a simple Korean priest turns vampire flick, then it gets different. Lust, ghosts, fantasies, vampire love and vampire helpers, "easy blood" and "fresh blood", betrayals, murders, resurrection, faith healing, drowning, flying, leaping, Mahjong, self-flagellation, realistic sex, strange virus, in-law abuse, a half-wit, warts, skin growths, and much more. The plot twists and re-twists and there are surprises. Some of the special effects are remarkable as they seem ordinary. Righteous ending at daybreak, too.

Chan-wook Park is one of those directors everyone should know but not enough people recognize. Thirst is a vampire movie with, well, bite - the story and characters are phenomenal as a priest slowly loses his humanity to vampirism through no fault of his own. There is sex and violence, though nothing too over-the-top. Interesting and recommended.

A priest accidentally infected with vampirism struggles with his new found earthly lusts and temptations while engaging in a love affair with an old friend's wife. Chan Wook Park indulges his fascination with the macabre with beautifully artistic visuals and a wicked streak of black humour as the vampire myth is once again deconstructed for the modern audience. Beautifully performed, particularly by Song Kang-ho as the tormented holy man in a nicely understated interpretation of a blood sucking monster who sees his condition as an unwanted curse rather than a gift. In fact technically, there is very little to be faulted here as aside perhaps from a rather slow first half, its pretty much a perfectly executed dark fantasy; the Crouching tiger style wirework of their undead acrobatics are …

I'm surprised "Thirst" doesn't get more attention. Like "Let the Right One In" it's one of the most creative and quirky of contemporary vampire films. Its combination of supernatural staples like super healing, strength, and the abillity to broad jump way far are anchored to the story of a selfless priest caught up in a fantasy he didn't create.

Director Chan-wook Park is the creative mnd behind such diverse films as "Sympathy For Mr. Vengeance" and "J.S.A. Joint Security Area (excellent film). His scenes are more character focussed in the style of Sergio Leone, than that of other Eastern directors. Anyway, the "Thirst" is a wonderfully rendered runaway horse. Park will strike obliguely at any time. The priest/saint/vampire played by Kang-ho Song is a vampire with a …

No posts have been made on this movie yet. Be the first to start talking about Thirst ( Bakjwi )!