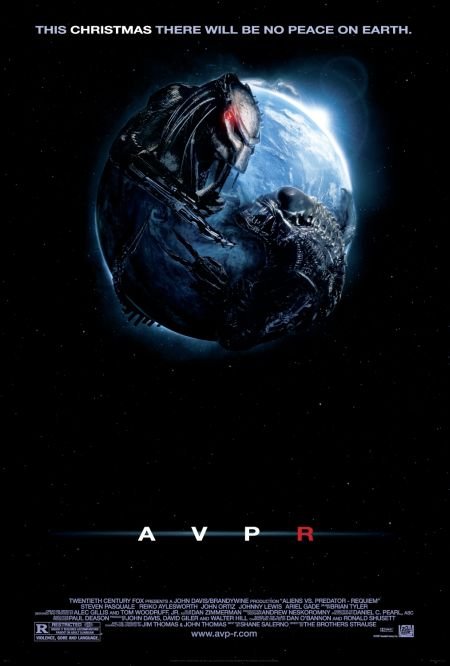 Plot: The two alien races are back at it again. This time, they battle it out in a small town in which the villagers have to save themselves from the two sides.

The two alien races are back at it again. This time, they battle it out in a small town in which the villagers have to save themselves from the two sides. This movie was pure rubbish with shit CGI and terrible acting as well. the gore is watchable and the all movie is in the dark so all the time you can't see crap.

This is a B-grade, 'monster vs. monster' exploitation flick done on a bigger budget. I do not consider this a good movie, by any means, but I did enjoy the straight-forward approach to the gratuitous violence and gore (something sorely missing from the first AVP). It's a brainless splatterfest that will entertain some, despite it's shortcomings in most areas.

Unnecessarily gory. Silly plotline. Action sequences that are poolry/darkly shot. The climax peters out. Need I go on?

AVP 2 continues directly from the ending of the first film, with an alien/predator hybrid causing the ship to crash land back on Earth. A second ship is dispatched containing a kind of space-age alien cross between a CSI and Batman to clear up the resulting mess. The first film was dumb but fun, but I have to say I did not have high hopes for this one. At first it seemed that my fears were going to be justified because the first act of the film resembled a teen slasher flick more than anything else, complete with semi-clad nubile teens, people being picked off one by one in dark corridors and the inevitable pre-scares and false alarms. However, once the aliens hit the surface things got a LOT better. It "borrows" ideas heavily from other sources, notably Dawn Of The Dead and especially …

PROS:
There is nothing to say about how good this film is. The only good thing about it is that hopefully it doesn't torture any more audiences.

CONS:
The list goes on with this film. Characters are poorly presented and when the characters are about to be killed; I don't care. The level of gore in this is extraordinary; it is suppose to be suspense not a slasher film. The special effects are seldom and very disappointing. The first installment is better than this. The plot; it is unspeakable. All I think it is about is aliens killing throughout a town and survivors trying to get out. Very cliched and very poor. The lighting was the worst and the most disgusting elements of this film; I could not see a thing. In the cinemas and on DVD. If the directors were trying to do what James …

The first Alien vs Predator wasn't as terrible as made everyone made it out to be but it certainly left a sour taste in your mouth. The Studio's decision to go ahead with a sequel seemed to stem only from the Box Office success of the first film, as opposed to any creative reasons. At the time of AvP's release Paul W. Anderson often said that a sequel was never intended, despite the open-ended conclusion to the film. Fox however thought better of that and presented us with the worst film of either franchise in Aliens vs Predator: Requiem.

It is an unnecessary sequel and an all around unnecessary film. One of the key selling points was the R rating that the previous film lacked. The "gore" in this film however is beyond ridiculous and really isn't anything to get excited about. It's …

My Alien Movie Rankings by The WHB

My DVD's: Sci-fi by Snoogans

No posts have been made on this movie yet. Be the first to start talking about AVPR: Aliens vs Predator - Requiem!