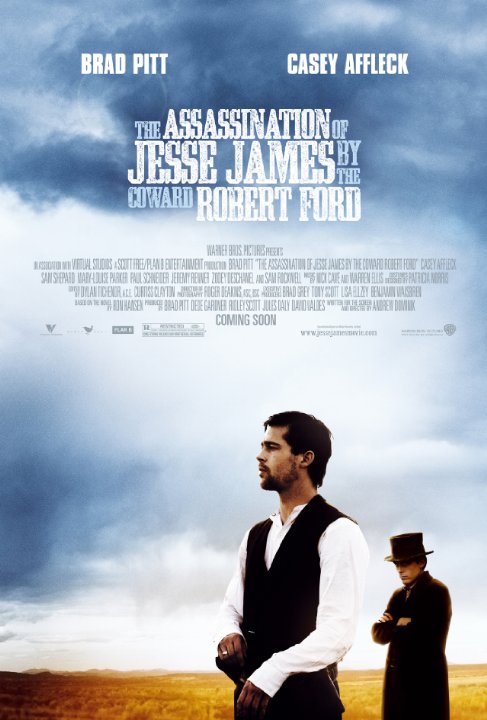 This the greatest overlooked Western of all time. It's how historical movies should be made. Absolutely brilliant.

Slow-moving character study of Robert Ford. I didn't mind the slow pace, except through the much too elongated middle bulk. We know what's coming from the beginning and piling on not-so-important scenes only pads the long running time. Add the mostly unneeded narration, and I became a little agitated for a stretch. The last 20 (or so) minutes carried a unexpected melancholic effect that I admired. There's also more to admire. The film boasts terrific acting, directing, cinematography, and music. As a whole, it's just on the verge of greatness.

Man it was tough not falling asleep while watching this movie

Jesse James: "I guess I'll take my guns off... for fear the neighbors might spy them".

The movie takes place in 1881 a younger member of the notorious James gang becomes so inextricably drawn to and frightened of his mentor that his own delusions of grandeur force him to consider doing the unthinkable.

This has to be the longest movie title ever, they might be other movies with long titles but this one takes the cake. Casey Affleck and Brad Pitt worked did a fantastic job in the movie, and they back and forward with each other was pure brilliant. The cinematography was gorgeous to look at and the directing is simply spellbinding. The movie does slow down at times and i'm not giving it the perfect rating, because I thought the movie was well done, but it's not "the best movie ever …

"The Assassination Of Jesse James By The Coward.."

The Assassination Of Jesse James By The Coward Robert Ford is a bit of a mouthful, but it's titled perfectly. The script is extremely literary and the title is deeply ironic and highlights the fact that real life bears little resemblance to the simplistic interpretation of events that "legends" present. In fact it was Ford's disillusionment in his dealings with the man compared to his childhood hero worship that probably contributed greatly to the resulting killing; that and his own wish to be revered as a "hero" himself. The cinematography is simply beautiful, the film resembling a period photograph come to life. The train robbery scene is one of the most visually stunning pieces of cinema I've ever seen. The performances are also top notch, particularly Brad Pitt whose intense and …

The Assassination of Jesse James review

The story of Jesse James (Pitt) and his accomplices Dick Liddil (Paul Schneider), cousin Wood Hite (Jeremy Renner), Bob Ford (Affleck) and Charley's (Sam Rockwell). After the murder of Jesse James, the Ford brothers became popular. Bob would play himself, and Charley as Jesse James. Bob would be labeled as a coward. Charley commits suicide while Bob revealed his reason for murdering James. Topics involving regret, idolatry, friendship and identity were present. This could have been a great film if only Affleck spoke clearly and if the editing were better since it ran too long due to unnecessary camera shots that donât connect to the story. Some epics are long but because of the way it was presented one can never mind its length such as Gandhi, Ben-Hur, Lawrence of Arabia, …

No posts have been made on this movie yet. Be the first to start talking about The Assassination of Jesse James by the Coward Robert Ford!