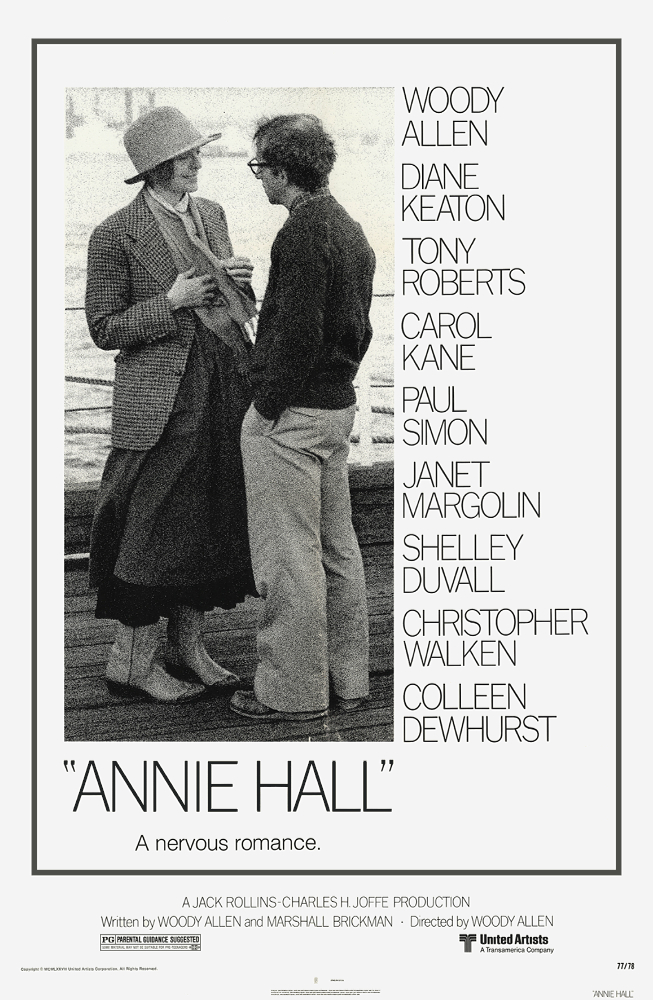 Plot: A New York comedian enters a break up with his girlfriend Annie Hall, as he reflects on the whole relationship - takes place during the 1970's.

Woody Allen's masterpiece does not have a single dull moment. You could watch it again and again, and still find yourself laughing.

Autobiographical, witty, absolutely clever and sexually analytical: No one could top Woody in his best decade. Annie Hall is, quite possibly, the best sample of his genius, while we witness simple reality collide with internal monologues of inevitable truths and a never-ending chain of psychological thoughts, aspects worthy of a renowned novelist! Woody and Diane: The "un"couple of cinematic romance. 97/100

Movies like this are copied all the time but I don't think they've ever captured the feeling the way Woody Allen did. God, it's just entertaining- I mean, the way it's put together. Some of the scenes could have easily been overdone, some of the jokes overplayed, but that didn't happen here. It was so perfectly imperfect but not in an annoying "look how quirky I am!" way and it was realistically awkward but not to the point where it got too uncomfortable to watch. I really loved it.

"We need those eggs"

Annie Hall: "It's so clean out here."

Alvy Singer: "That's because they don't throw their garbage away, they turn it into television shows."

If someone ever asked me what some of the best screenplays are out there, the first would be âPulp Fictionâ and the second being âAnnie Hallâ. A remarkable movie, unlike anything before or since. The visual storytelling adds to the sharp comedic charm. A prime example of life imitates art.

âAnnie Hallâ is a romantic comedy that defies movie conventions. Itâs no Hollywood fluff, nor is it a depressing soap drama. Itâs a movie that looks at the ups and downs of relationships, because relationships aren't that black and white. It finds the right balance that you rarely get. It politely destroys your fantasies by introducing a …

(Not) the comedy milestone.

Considered to be Woody Allen's masterwork of romance and humor, Annie Hall has gone down in history with many filmgoers and critics alike for being so relatableâ¦ I can testify it's a good romcom, but where exactly is the relatable part?

I of course like, what everyone understands under the film. The humor and the way it is displayed. The dialogue is over the top and extravagant. I simply adore the way the story is told through nervous Alvy Singer's eyes, often breaking the fourth wall to bring a point across or express something. His mannerisms and way of speech add all the more hilarity to the role and brings new life to romantic comedy couples. Every time those two were on screen, I was giggling.

My main problem with this film is that I don't know how to properly judge it. I …

The on-screen romance between Allen and Keaton works wonders for this film. It's unfortunate that the impressive dialogue was not realistic enough. Who would say these lines in real life? "Don't you see the rest of the country looks upon New York like we're left-wing, communist, Jewish, homosexual pornographers? I think of us that way sometimes and I live here." or letâs say "Sometimes when I'm driving... on the road at night... I see two headlights coming toward me. Fast. I have this sudden impulse to turn the wheel quickly, head-on into the oncoming car. I can anticipate the explosion. The sound of shattering glass. The... flames rising out of the flowing gasoline." Creatively pessimistic and annoying. Had a few laughs like when Annie was driving fast and a young Alvy with his …

No posts have been made on this movie yet. Be the first to start talking about Annie Hall!