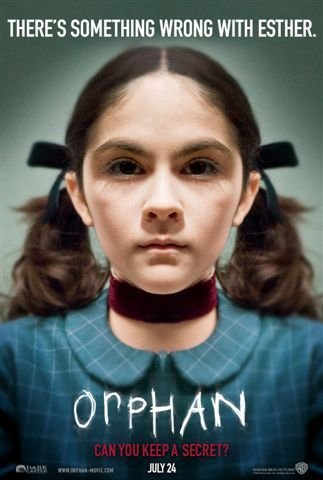 Plot: When a couple lose their baby in childbirth, they adopt a nine-year-old named Esther to heal their marriage and psychological wounds. Soon after arriving home, strange things happen, leading the mother to believe their new, angelic child is not what she seems.

It starts out promising and has quite the climactic twist, but "Orphan" completely stumbles after that, and hits nearly every thriller cliche on the way down.

Pretty good movie, I liked it and enjoyed it. However, I hated the main character so much it really kept me from really liking it...however that might have been the point. Overall I'd say it's worth a watch.

When a couple lose their baby in childbirth, they adopt a nine-year-old named Esther to heal their marriage and psychological wounds. Soon after arriving home, strange things happen, leading the mother to believe their new, angelic child is not what she seems. This movie is scary and chiling to watch and you think that this movie may look like a horror flickt that's been done to death, but this film make you feel bad for saying all the bad stuff.

A rare horror with elements of mystery and drama. This movie reminded me of The Usual Suspects, Psycho and The Sixth Sense, in a more gruesome and dark comedy way. Twist was unexpected though somewhat a bit late in the story. Kate Coleman (Vera Farmiga) and her husband John (Peter Sarsgaard) still have effects of their third child who was stillborn. They both bring in a new member to the family consisting of deaf daughter Max (Aryana Engineer) and son Daniel (Jimmy Bennett). The 9-year-old Russian girl named Esther (Isabelle Fuhrman) is clearly different from the rest of the girls. Score was apt and performances were key to make it work. This psycho-child thriller is a horrific ride despite its slow start. Vera Farmiga was amazing and you can really feel the emotion. (Isabelle …

Outstanding - Esther will freak you out!

ORPHAN is a horror thriller about a little girl Esther who is adopted by a family which suffered a recent trauma - losing a child. The family already has two kids one of whom, a little girl is deaf, but the parents (Vera Farmiga and Peter Sarsgaard) decide to adopt possibly to overcome the loss of their unborn child. They choose a 9 years old girl who was born in Russia but speaks English very well as she's been living in the USA for some years. She's wonderful, talented and gifted but there's something about her, as Mom Kate gradually comes to realize when she begins her little tricks. Unfortunately Dad John can't see it. Esther played by 12 year old Isabelle Fuhrman is terrifying and her Russian accent really adds to her creepiness.

The twist ending was absolutely brilliant and …

I tried to get my better half interested in âThe Proposalâ, but she just wasnât in the mood for anything Sandra Bullock-ish. Then the listing for âOrphanâ caught my attention and I proclaimed I was going with or without her! Sheâs a sucker for a good thriller, or at least the promise of one â so it was a done deal. Personally I had to wonder as I had not heard much buzz on this or seen much in the way of promotion. My gut feeling was that it was probably truly bad, or was just âflying under the wireâ as a box-office near miss. I was willing to investigate!

For starters, we have Jaume Collet-Serra in the driverâs seat as the director. He last helmed âHouse Of Waxâ (2005), and his sophomore effort in âOrphanâ shows a lot of professional growth. I noted a lot …

No posts have been made on this movie yet. Be the first to start talking about Orphan!