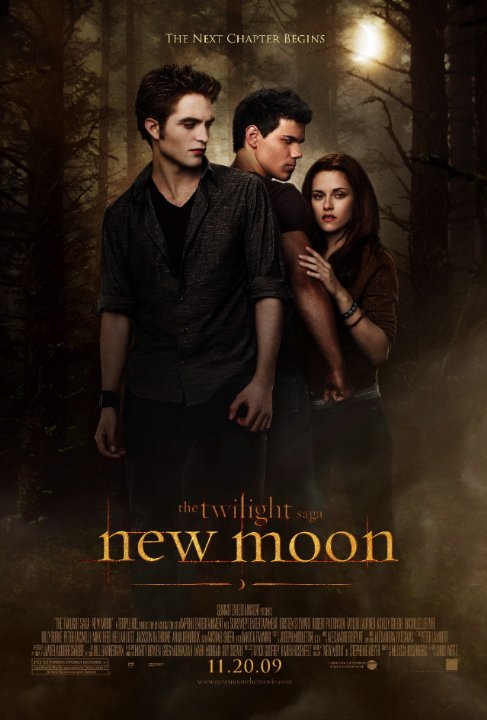 Plot: Bella Swan has to deal with the sudden departure of her vampire love Edward. Looking for help, she turns to Jacob Black where her friendship develops into something more. But Jacob has his own secrets, one that will test Bella's loyalty. -- Chris Kavan

This is the only Twilight film that I found watchable. Simply because the character Jacob Black seemed to make apathetic Bella Swan smile and laugh for once, he seemed a lot healthier for her character, and the style of the film was lovely, I wish they would have reused Chris Weitz as the director for the rest of the film series..

Marginally better than the first film, but still very slow-moving and emotionally devoid.

I have never read the books (nor will I ever) and I didn't really care for the first one. The acting in the first one was beyond terrible and Kristen Stewart is just a depressing teenager, I can hardly stand it. So I saw this movie because I didn't want to see "The Blind Side" because I knew it was just like every other true story sports movie.

This movie is infinitely better than the first movie. Yes, the acting is still pretty bad (though not nearly as bad as the first one) but I think the main reason why I like it is because of the Taylor Lautner dude. He is a stud (unlike Edward). The action is good the pacing is good and the twists are good. It actually really made me want to see the 3rd one.

I would choose this teen flick over any predictable, un artistic drama out right …

This film didn't quite "hit it" the way the first one did. To begin, the beginning of the film felt a little hurried. One minute everyone was at a birthday party next Edward is telling Bella that he has to leave her. It seemed to have come out of left field. Speaking of Edward and Bella, they chemistry was definitely lacking this time around. I can honestly say that I didn't really care about their love. I almost wanted Bella to be with wolf boy, because that relationship was just so much more interesting.

Also, the writing was just a little bit dramatic for me. Every time that Edward and wolf boy spoke it seemed like they were reciting a Shakesperian sonnet or tragedy and it became annoying. Stewart was by far the best character in this film. She stayed consistently tragic, …

No posts have been made on this movie yet. Be the first to start talking about The Twilight Saga: New Moon!