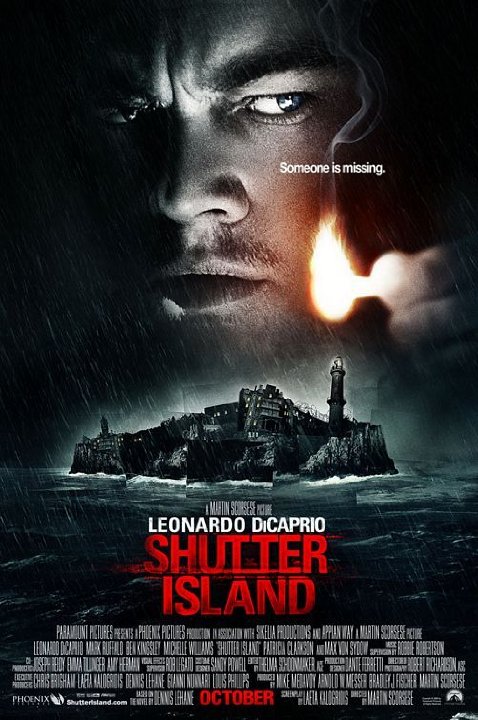 Plot: US Marshal Teddy Daniels is sent to Boston's Shutter Island Ashecliffe Hospital to investigate a patient's disappearance. Long seeking to get to the island for personal reasons, his promising investigation is halted by the hospital blocking records. With a twisted doctor running things, and a hurricane looming, Daniels soon begins to question the real reason why he's there. -- Chris Kavan

Di Caprio is in so many must watch movies. Shutter Island, The Revenant, The Wolf of Wall Street, The Departed, Inception etc... This film ranks just below those in my opinion by just being a good movie, not incredible. It is a mind bending thriller with DiCaprio as a police detective investigating an island mental asylum who finds a deeper mystery.

I was so confused watching this movie 0_0

It ranks as Scorsese's most generic film, but its chilling atmosphere and unpredictable story make it one of the better meat-grinder genre films.

As the closing credits rolled for âShutter Islandâ, I purposely stood back and carefully listened to the comments of the departing audience. I was curious if anyone was going to echo my own sentiments about the murky way the film wrapped up. I heard enough to feel that my own minor misgivings were at least somewhat justified. I donât want to say that this film isnât good â because it really is. But it could have been perfect, if only for just a bit of tweaking.

âShutter Islandâ is taken almost verbatim from a book written by Dennis Lehane (âMystic Riverâ and âGone, Baby Goneâ) and brought to the screen completely intact by Hollywood legend, Martin Scorsese. Typically we expect movie versions of books to be mutations (at a minimum) or total miscarriages of the …

A cuckoo's nest on an island

A brilliant psychological thriller where nothing seems like it should be. You'll be mislead the whole movie. The denouement is extremely surprising and plausible, but then turns right back to an open end which raises the same question : Is Ted still living in his unreal delusional world or is he really aware of his ultimate identity and thus voluntarily commits suicide to get rid of the agonizing trauma that chases him for years? Indeed, a true "mind fuck " in this movie.

Scorsese placed the whole story on a remote island. Superbly portrayed as an isolated, desolate, rough rock where escaping is impossible. Using the ferry is a possibility but it's in the hands of the institute. The movie begins as the ferry arrives on the island with Ted (Leonardo …

I could go on about the hidden brilliance of this masterpiece for hours.
Scorsese is so unpredictable. I respect him for his risky changes of style and exploration of various genres. With Shutter Island he has delivered (in my humble opinion) a smart, delicate, philosophical and dramatic feature, which I consider one of his greatest films.
The Academy must have something against Leonardo DiCaprio, because he is snubbed every frigging performance he brings to the screen. This is by far the most fragile, haunting and dramatic performance of his career and he makes the entire movie for me. His character would be nothing without him.
From the moment that ship appeared through the gentile mist, I was hooked. I loved its use of lighting, its ominous location, its creepy characters and its …

Looking forward to it after seeing the trailer.

This does not look good but I have trust in Martin Scorsese.