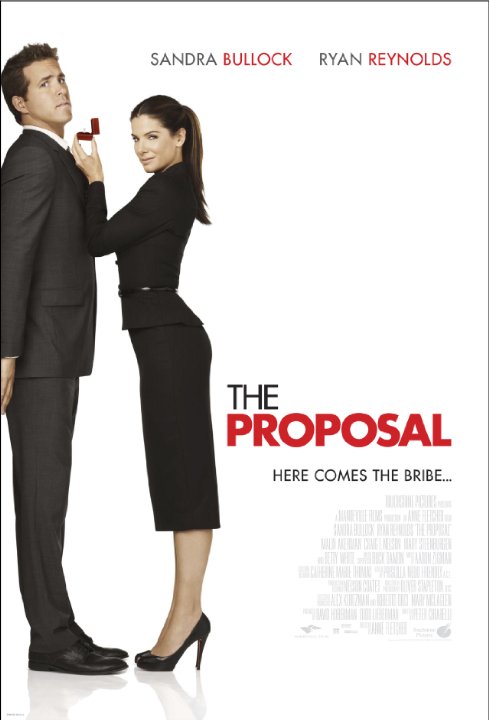 Plot: Margaret Tate is a hard-nosed executive who is brutal with her assistant. She also happens to be a Canadian whose Visa is about to be revoked. Taking matters into her own hands, she forces her assistant to marry her in order to stay in America.

Margaret Tate (Sandra Bullock) is a Canadian Editor about to be deported. She orders her assistant Andrew Paxton (Ryan Reynolds) to marry her and makes a deal for him to become an editor. They go to Alaska to get to know one another while meeting Andrew's family. The idea of bribing a subordinate, humiliating your boss in public and prancing in the woods to get back to nature was a bit too much to swallow. Bullock always fits in comedy but Reynolds just wasn't convincing enough in this genre. Betty White was really good and the locations were scenic. The Proposal had a few laughable sequences, but a few sappy and unrealistic moments as well.

Well, I'm sure I was one of millions who could predict this movie from start to finish. Though I adore Sandra Bullock and Ryan Reynolds isn't bad, this film was just boring and unfunny. It would have been a million times better if they'd just continue to hate each other at the end. A real drag. It could have been better, but it just wasn't. Too bad.

Solid chemistry from the two leads and a rom-com that doesn't feel the need to connect the dots between romantic movie cliches. Pretty funny in parts.

Marry me or you'll lose your job!

Sandra Bullock plays a cold and bitchy Canadian book Editor Margaret Tate working in New York. She was not able to take care of her mmigration papers, and is under threat of deportation because her Visa has expired. She coerces her assistant Andrew Paxton (Ryan Reynolds) to marry her, in order to circumvent this problem. Naturally he hates her but goes along with it. The two of them fly off to rural Sitka, Alaska to meet Andrew's family because they need to prove it is a ârealâ relationship.

Andrew introduces Margaret to his parents (nicely played by Craig T. Nelson and Mary Steenburgen) and his spry "Grammie" about to turn 90 (the always reliable Betty White who practically steals the film). There, Margaret discovers the warmth of family life, love and the hunky Ryanâs amazing …

The eagles will snatch him.

The Proposal is a 2009 American romantic comedy film directed by Anne Fletcher and starring Sandra Bullock and Ryan Reynolds. The screenplay was written by Pete Chiarelli.

As I said in my Speed 2: Cruise Control review, I think Sandra Bullock can do no wrongand neither can Betty White, who stars as Grandma Annie. This is the second movie I've seen Ryan Reynolds in (the first being X-Men Origins: Wolverine) and he also does great.

Unfortunately, the script is kinda stupid, and sometimes the actors have to deliver some pretty stupid lines (If you get chilly tonight use this. It has special powers.), but the actors deliver them in a way that doesn't sound as stupid.

If you like any of the actors or rom-coms, check it out. If not, pass.

Do I Adore This Movie? I Do.

Sandra Bullock and Ryan Reynolds were truly a delight to watch in this film. Ryan Reynolds has incredible and very underrated comedic talent. He had me falling out of my seat at various moments in the movie. The multi-talented Sandra Bullock always knows how to get a laugh. She can do any kind of movie and be brilliant in it. I must say, in The Proposal she was quite stunning. She looked absolutely gorgeous. I thought the pair had a great chemistry. I thought the age difference was going to be weird, but it honestly was of no relevance. They worked, and they worked it. Also, Betty White...it's nice to see that she's still getting to do movies. Stay fierce, Betty, stay fierce. The only reason this didn't get the four is because, well, it was quite predictable. There were some parts in the …

No posts have been made on this movie yet. Be the first to start talking about The Proposal!