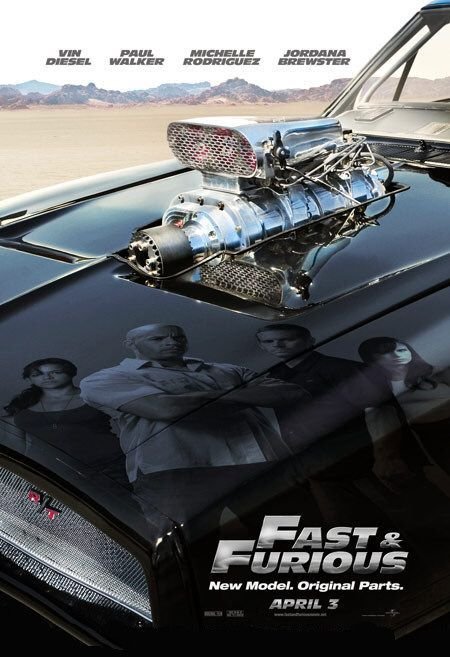 Plot: Released form prison, Dominic Toretto picks up his feud with FBI agent Brian O'Conner, but has to form a precarious alliance when a new rival appears as a common enemy. One thing is for certain, the score will be settled behind the wheel.

It was a okay action flick.

Utterly pointless, a film that rehashes a lot of the plot moments and stunts from previous films. The villains are uncompelling and the movie moves at a breakneck speed that leaves little room for character or plot development.

This entry seems to inject some new life back into the series, with more speed and entertaining action set-pieces. The whole experience was uneven and the finale was sorta lackluster, but it feels like it sets up bigger things to come.

Sometimes franchises are hit or miss due to the cast, screenplay and direction. In the case of The Fast and Furious, with a decent director it can work. Film starts where Dominic Toretto's (Vin Diesel) crew start hijacking fuel tankers. Brian O'Conner (Paul Walker) tries to track a drug dealer. One of the most serious from the franchise with thrilling action sequences that keep you enticed all-throughout. It shows that Vin Diesel can do a little drama. If only there was better character development and a more devious antagonist. Soundtrack and direction were wonderful compared to the last two. Fast & Furious is one of the darkest and well acted of the bunch, with car chases never scene before, despite it's feel of Hollywood effects instead of capturing realism.

Fast cars, hot girls, and pure exploitation B-movie fun. That pretty much sums up why I enjoyed Rob Cohenâs 2001 hit âThe Fast and the Furious.â The latter made stars like Vin Diesel, Paul Walker, and Michelle Rodriquez household names and the chance at stardom. The sequel, titled â2 Fast 2 Furiousâ is pure garbage entertainment. The flat one-liners that are suppose to be funny, the ridiculous chase sequences in substitution for simple drag racing, and the absence of basically every major component to the first movie, with the exception of Walker, hurt the second installment considerably. âTokyo Driftâ was the first film to take the street racing world out of the country. Does it work? Not really. But it is a step up from its predecessor and features a fun little cameo from …

Although still not as good as the original, the fourth installment of the Fast and Furious series makes up for the misguided third film and even betters the second.

This is a guy's movie all the way - fast cars, half-naked women (sometimes making out), action galore and the right touch of humor. Better yet, the story is not only coherent, it manages to throw in a decent show of emotion. This is the movie that guys will drag their girlfriends to in order to make up for Sex and the City.

Besides the decent enough story, the main thing the movie has going for it is that the principle cast has joined us once again. While Paul Walker isn't the most exciting actor around, he's still a welcome return. Vin Diesel still plays the brooding anti-hero to perfection. Jordana Brewster and …

Fast &amp;amp; Furious was definatally better than the first three due to the fact that it focuses more on character and story than women and pimped out cars.&amp;nbsp; Basically, less flash and more plot.

So is this better than the original?

I am kind of the same way...I love the firsts one (shamelessly!) but don't think this one will be very good.&amp;nbsp; It is funny that all these actors are on a low now.

I know I shouldn't be excited to see this movie but I am. Â It has the whole cast back from the first movie and everything! Â :o)