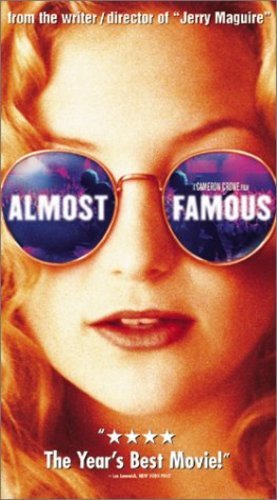 Plot: A 15-Year old is given the chance of the lifetime when Rolling Stone hires him to accompany an up-and-coming band, Stillwater, on their tour. What follows is a lesson on life, love and rock n roll.

What a great movie. All of the characters fit and they suck you into the era perfectly. When the movie's about to end, I get this strange sadness, as though I'm losing a friend. Probably just me and my strange attachment to good movies though. "That's because we're uncool. And while women will always be a problem for us, most of the great art in the world is about that very same problem. Good-looking people don't have any spine. Their art never lasts. They get the girls, but we're smarter."

The rock film of a generation.

To see a film like this is not exactly relatable for me, but one of the most significant throwbacks of my dispositionâ¦ If that makes any sense.
With that said, you know I'm not a 'party animal', but I, like many others am an aficionado of the rock genre, which is sadly deteriorating as our musical society becomes more and more indigent in quality, and wealthier and wealthier in bad taste.
This movie is 13 years old, and yet it still holds its ground of what truly was the golden age and reign of music.

To choose the strongest point in the film is a challenge in itself. It feels like every element is paramount. Every song, ever character's expression, every line of dialogue, delivered at the right time, but still feeling natural.
At that time newcomer Patrick Fugit's acting is …

Every music lover and fans of rock 'n roll should definitely have this in their video collection. The second viewing of this great film makes it a small classic on iits own. A movie about about the director's experiences with bands such as The Allman Brothers Band, Led Zeppelin, The Eagles was a real treat. William Miller has a sister who thinks someday that he will be cool. They are both guided by their wise mother Elaine (Frances McDormand). William meets a band and quirky Penny Lane (Kate Hudson). Hudson radiates and clearly made the film authentic while the rest (Cudrup, Lee, Fugit, Deschanel) were sincere with the performances. Everything felt realistic from the direction, acting, sets, to the concerts. Impossible not to be touched, smile or think about the lessons one can …

This is one of the best rock and roll movies of all time. The soundtrack is timeless, the characters are realistic and believable. The scenery and cinematography are excellent as well. This story is in many ways about the loss of William's (Fugit) innocence as he experiences first hand how different rock and roll bands are from their portrayal in the media. He clearly sees that his heroes are far from great, as they engage in various forms of debauchery, trade groupies for beer and money, and generally disrespect anyone around them. Perhaps Crowe is on to something with his unsympathetic portrayal of rock bands.

The screenplay is brilliant and Crowe does an excellent job bringing the whole project together. The viewer can clearly see Crowe's fingerprints all over the film, as …

No posts have been made on this movie yet. Be the first to start talking about Almost Famous!