Haunting in Connecticut, The Movie Information 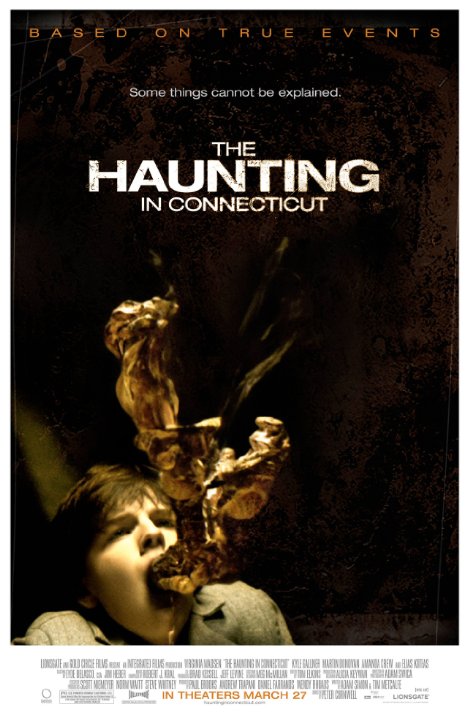 Plot: Based on real events, a family moves to upstate Connecticut to help their son but the charming Victorian house has a dark past as former mortuary causing increasingly violent supernatural events to occur.

This movie is great, and didn't stray from the truth that much. Well, it wasn't scary, I mean I've been living with ghosts for a decade, but it's a nice horror movie.

Meh - your basic ghost story. Despite being based on "true events" the movie throws in a bunch of stuff that was used in such classics as Poltergeist and the jarring music punctuated ever jump scare. Typical.

The background of this supposedly real life story is creepy enough, sadly the movie decides to take that story and add in things that are "supposed" to be scary. As a result you end up with a lot of silly scary movie cliches, and an ending that builds in absurdity and ridiculousness. It does have some pretty good acting from Virginia Madsen and Kyle Gallner as the mother and son dealing with all the problems.

This is a pretty standard jump scare haunted house movie. The acting isn't horrible but it's nothing to write home about. The movie plays up the based on the true story angle but if you watch the special features on the DVD you learn that the vast majority of this movie is fiction. The biggest example being the burning of the home at the end. It never burned down... ever, yet the end of the movie says that the house was " rebuilt and resold". Somebody does live in it now but it never burned to the ground or had the dead no decomposed bodies built into the walls. So taking that in to effect we see that the movie isn't really based on the true story making it just another cookie cutter haunted house film full of predictable jump scares. This is a good movie for middle school and …

It won't give you nightmares, but see it anyway

To be honest, I really found this movie more sad than scary.
A teenage boy, stricken with cancer, and his family rent a home to be closer to the hospital where the boy is receiving his treatments. It soon comes to light that the house was once a funeral parlor where seance's and other not-so-pleasant things once took place. Before long, many strange things start happening in the house, and Matt, the teenage boy, is most affected by this. At first, his parents think the treatment he's undergoing in a clinical trial is to blame for his hallucinations, but it soon becomes apparent that something is very wrong in their hell house.
This movie is pretty much your standard things pop up and scare you type of flick. The story is interesting, but hard to follow at some times because it's …

The Haunting in Conneticut.

The Haunting in Conneticut.

A story revolving around a family with a son who suffers from cancer, they move into a cheap rented home. a dream for ther family, but there's a catch - it's a former funeral home. Matt Campbell, who suffers from the cancer, takes thge basemnt as his room whilst undergroing radical treatment for his disease. BIG MISTAKE. A series of increasingly errie and terrifying supernatural events occur, with Matt delving into the houses history with his rather attractive carer, Wendy and learning that back in the 19th century, a mediuym by the name of Jonah helped a necromancer scientist (indeed) named Ramsey Aickman in his research of necromancy. The event sof the past show uis Jonah is a friendly, if not grotesque and monstrous, ghost who wants to warn Matt about …

According to ComingSoon.net, the new release date for this movie is 3/27/09.

This haunting was the first episode of the Discovery channel series &quot;A Haunting,&quot; which, for those of you who aren't aware, documents real hauntings.&amp;nbsp; As a fan of that series, I have to say the story is pretty creepy (family moves into a house that was once a funeral home).&amp;nbsp; If they stay true to what supposedly happened, it could be good, but if they stoop to cheap horror movie tricks,&amp;nbsp;it won't be.&amp;nbsp;

I am skeptical of paying to see it after that American Haunting movie stole 2 hours of my life, but I would probably watch it online.

Saw the trailer and I am not impressed. It looks boring, stupid and uses cheap&amp;nbsp;jump shots&amp;nbsp;to try and scare you. Another supposed &quot;base on actual events&quot; horror more that looks like a knock off of the Amityville Horror remake

Anyone here want to see this movie? I will be the first one in line. It is based on a true story of the paranormal experiences of a Connecticut family. There was a book written about it too called &quot;In a Dark Place&quot; by Ray Garton, published in 1994. There is also a documentary&amp;nbsp;featured on the Discovery Channel&amp;nbsp;called &quot;A Haunting in Connecticut&quot;. I have probably seen this documentary about 20 times because I love it. I cannot find the book though since it is out of print. The movie is &hellip;