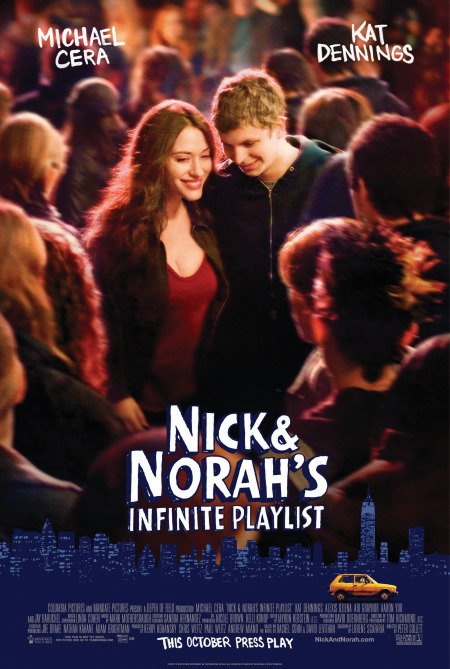 Plot: A young high school grunge band member is asked by an aspiring college student to be her boyfriend for only a short time. They share a kiss, which of course pisses off her ex boyfriend. Well, her ex boyfriend does the same to the girl next to him. So begins the night long chase as they try and one up each other. Could they potentially fall in love with their 5 minute new friend and do you think it only lasts five minutes?

This movie gets me excited every time I see it. Makes me wanna drive the 30min to NYC with the radio playing. Nothing is better than catching your favorite band in a small venue. This movie captures what it needed to. Michael Cera is great as always.

For me, a very nostalgic film, driven by memories of late nights in the city and a connecting love of music. For music-lovers, this will be a special film, but, for others, the actors are all talented and charming enough to make this enjoyable.

I love this movie! It really captures the adorable-ness and awkwardness of young love and virginity. It makes me want to be a teenager, drunk and loose in New York City. This movie is real, Cera and Dennings are beyond lovable, and it's extraordinarily romantic. And funny! All around great. Watch it with your new boyfriend or at a slumber party, or enjoy a very awkward scene with your parents!

Even though Michael Cera plays the same type of character (âSuperbad,â âJunoâ) in pretty much every movie, I love him for it because heâs the master of awkward teen comedy. He has great comedic timing and he always gets his audience to care for his character in under twenty minutes. This film is about the adventures of Cera and Kat Dennings in one nightâfrom finding the drunken Ari Graynor, dealing with the ex-girlfriend Alexis Dziena, having good fun with the gays (Aaron Yoo, Rafi Gavron, Jonathan B. Wright), to attending a âWhereâs Fluffyâ concert. If one looks at the overall picture, it may not amount to much because itâs directed more toward high school and college students, but itâs undeniably cute and has its genuinely funny moments (that Ellen Degeneres bit …

Almost, but not quite

A cute movie, but lacking that little extra "something" to make it great. Perhaps I'm not the target audience?

I just think back to the movies of MY teenage years. I mean, has anything ever come close to a "Sixteen Candles" or "The Breakfast Club"? In my memory, those were amazing films! And they made lasting impressions on me and my peers. Do today's youngsters have the same reaction to this one?

If so, that's great. Because there have been far worse teenage comedies. But I don't relate to the... "mentality" of these characters. First of all, I couldn't get past the fact that high school seniors are staying out all night in New York City. Are they even of legal age to drink? (A major plot point revolves around a girl who always gets drunk.) Where are their parents? Is …

Slow. A Little Too Slow.

Well, I wasn't very excited to see this movie, Sure i wasn't dissapointed, but I was thinking more along the lines of Blindness or Religulous, but sadly, the theatre was not showing either of the two movies. So I decided to give Nick and Norah a chance.

Im aware this movie was made after the best selling teen novel of the same name, and it shows because movies based on novels usually just don't pan out like the book, in order to fit everything in and not well ruin it for everybody. Throughout the film there are many plotholes and such, which slowed the movie down more than Cera's damned Ugo car.

Nick and his band are performing a gig at a small nyc club, when Norah and her friends show up for the party, and in desperate situations, Norah gets Nick to go along with the whole thing …

Favorites of 2008 by Austin Shagwell

No posts have been made on this movie yet. Be the first to start talking about Nick and Norah's Infinite Playlist!