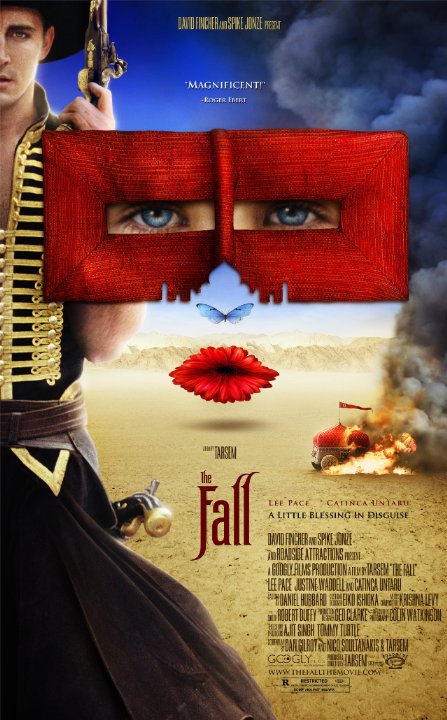 Plot: A stunt man in 1920's Los Angeles is met in a hospital by a young girl with a broken arm. He begins to tell her a story of 5 mythical people. The story becomes more vivid and more tied together between the two as the film goes on. What was the purpose of the story and how do they relate to the two characters is the real question.

Don't expect to find a well-defined, story-rich film in watching The Fall. The Fall is, chiefly, a visual masterpiece and, as a work of visual art, it is interpretative by its audience. Director Tarsem creates striking and memorable imagery that plays with concepts of storytelling, imagination, and redemption. It's unforgettable.

The film as you may already have heard, looks stunning. It really does. But does that make it a good movie? It certainly helps, but as it is, its an affecting piece of cinema. The story of a young girl with a broken arm seeking solace in another patient is touching. The the patient (Lee Pace) tells the little girl a fairytale which is acted out with flashy characters and flashier visuals, and takes up half the movie. And thats the problem, while its a good story being told, the scenes in the hospital are much more engrossing. The performance from little Catinca Untaru is just beautiful, and Lee Pace as her storytelling friend is equally great. Overall, its a very good movie but not completely great.

A breathtaking example of pure visual storytelling, Tarsem Singh's fantasy epic THE FALL plays out like a more bizarre and sometimes darker version of THE PRINCESS BRIDE. Shot in 28 different countries over four years and using no computer generated imagery, the scale and scope of the physical production is astounding. Despite its gigantic size and majestic scenery, there is a smaller and sometimes touching story at the center.
A stunt man named Roy is injured on set in 1920s Hollywood. Broken physically and psychologically, he meets and befriends a young girl Alexandria who is also a patient at the hospital. He tells her a story to pass the time which transports them to a mythical timeless locale where five superhuman adventurers battle an evil tyrant, rescue princesses, and other …

"The Fall" by Yojimbo

A paralyzed stuntman entertains a little girl with fairytales while in hospital with the ulterior motive of tricking her into helping him commit suicide. A great deal has been made of the fact that this film was shot in 20 countries around the globe, but my question would have to be: "Why?" The locations although visually spectacular have no bearing whatsoever on the story and the film amounts to little more than a flick book of postcards of famous places. It's all very nicely shot and the costumes are magnificent, but the so-called "allegory of a broken psyche" is just storytelling as a clumsy and unsophisticated metaphor for the main character's state of mind. The tale itself is like hearing the unfocused, unexciting and unfunny rambling of someone who is terminally sorry for themself …

A Rich Work Of Art

It is as though Singh embarked on a comprehensive examination of the planet, plucking just the right locations, like a painter would with hues, to create this tapestry of luxurious delights. The Fall is one of the most rich, entrancing tales to be told through film. Both adorable, and beautifully sad, it's a pleasure for the senses, as well as the heart, in much the same way that Pan's Labyrinth succeeded.

The characters are dear, and the use of somewhat unknown (or inexperienced?) actors greatly increases your ability to sink in and take their situations seriously. Playing the role of the damaged stunt man, Lee Pace will (or maybe SHOULD) gain much respect for this difficult performance, and for proving his ability to impressively carry a film along side a child. He not only achieved …

Drivers and Stunt Men by Protozoid

No posts have been made on this movie yet. Be the first to start talking about The Fall!