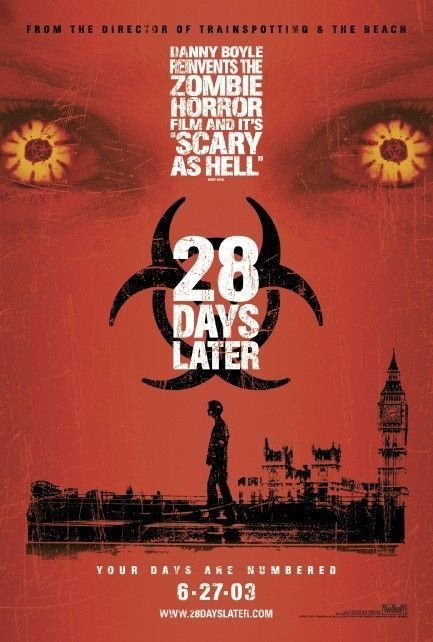 Plot: An animal right's group accidentally releases a virus that turns England's population into rage-infested zombies. Only a few humans remain to fight off the flesh-hungry hoard.

It's more of a B-movie than some sort of allegory, but it's an often terrifying one.

Animal rights activists free a group of infected chimpanzees to horrifying results in this speculative sci-fi horror effort from Trainspotting director Danny Boyle. Waking from a coma in a deserted London hospital 28 days later, bicycle courier Jim (Cillian Murphy) takes to the deserted city streets in a state of mystified confusion. This movie is scary and the zombies are not slow brainless fools they can run after you and they can clam.

NOT scary at all

Zombie Movies are not Horroe Movies

This review will be more geared towards all zombie movies. I chose 28 Days Later to write this review because it isn't groundbreaking or "excellent"... it is just a zombie movie.
It is unfair to call zombie movies horror movies. They are distinctly different breeds and should be watched and judged as such. What zombie movies do that little horror movies can do is; on a large scale show the human form amidst complete societal breakdown. What I take from most zombie movies (28 Days Later included) is that zombies breakdown barriers to show how human intelligence not confined by societal rules and norms are more evil and scary than zombies themselves.
Also, come on man..... zombie movies make you think about what it would be like to live through a zombie apocalypse. Its a weird daydream …

A young bicycle courier wakes up from surgery in central London to find it completely deserted, until he is attacked by a horde of rabid people screaming for his blood. Danny Boyle's spin on the zombie movie, although as inevitably generic as you'd expect has enough quirks to make it stand out from an overpopulated crowd. The English locations alone are enough to give it an unusual flavour and the scenes that show him wandering through the empty city are genuinely spooky. When "the infected" appear it settles down into the usual cliches but at least Boyle understands the genre better than most and concentrates on the psychological horror of the death of civilisation and the zombie attacks have the requisite tension and suspense. Unfortunately the second half of the film is far weaker …

Jim (Cillian Murphy) wakes up from a coma and sees a deserted London due to a virus which emanated from chimpanzees. He is saved by Selena (Naomie Harris) and another survivor. Both Jim and Selena discover more survivors named Frank (Brendan Gleeson) and daughter, Hannah (Megan Burns). The remaining survivors encounter Major Henry West (Christopher Eccleston) with a mansion filled with soldiers. Some lines: Selena â âThe infection was everywhere. The army blockades were overrun, and that's when the exodus started.â Maj. West â âSince it began, who have you killed? You wouldn't be alive right now if you hadn't killed somebody.â âWhich is much what I saw in the four weeks before infection, and the four weeks before that, and before that, as far back as I care to …

No posts have been made on this movie yet. Be the first to start talking about 28 Days Later!