Village of the Damned Movie Information 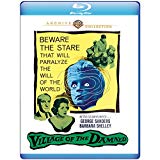 Plot: An entire small English village loses consciousness for a day; later every woman in the village discovers she's pregnant. The children that are born to them all look similar and share unusual powers. -- MaceeRae

The children of the village became one of the most iconic horror movie monsters of all time thanks to this smart and disturbing little classic.

An ominous Atomic Age atmosphere and a cast of creepy looking children make "Village of the Damned" an eerie horror movie.

Classic British sci fi based on The Midwich Cuckoos in which the children of a small town suddenly develop supernatural powers and start behaving as one. A little dated, but it still has it's spooky moments and is initially intriguing.

Top 8 Horror Films of the 1960's by Stoney McStonerson

No posts have been made on this movie yet. Be the first to start talking about Village of the Damned!