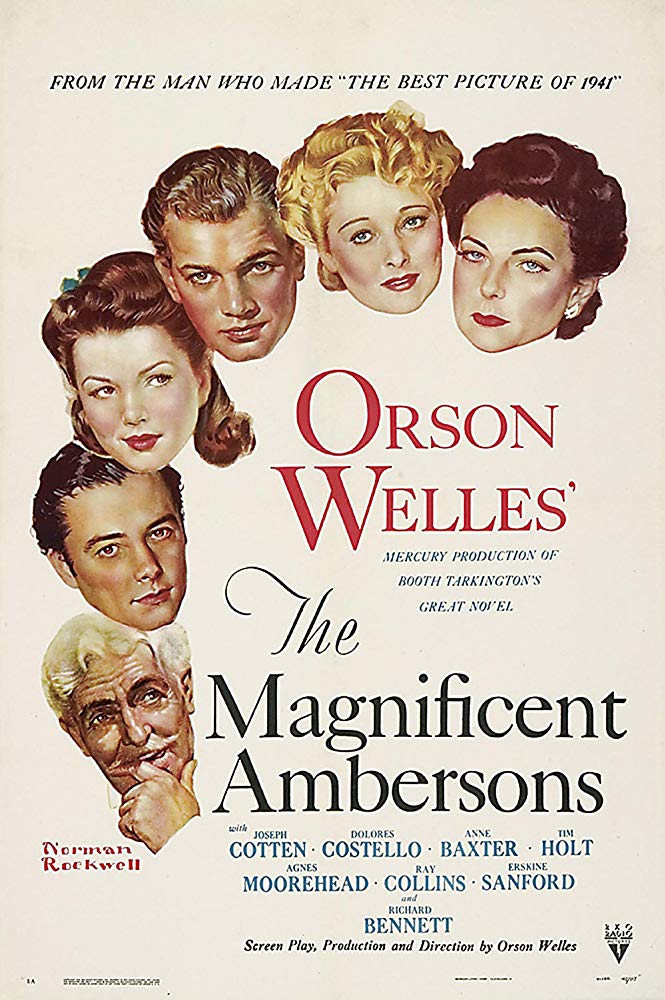 Plot: The story of a rich family in the early twentieth century unfolds over many decades. As a young man, Eugene wishes to marry Isabel, but is too wild. Years later, having achieved success in business, he returns and seeks to marry the widowed Isabel, but not all of Isabel's family is happy with this development.

A nostalgic photograph of an American era defined by change and wants. Few melodramas have captured shifts in society as perfectly as this Orson Welles directed soap.

I know that this movie has been described as an artistic compromise or even a failure, and that Welles wasn't happy with the final cut. Well, it might not be Citizen Kane, but I found it beautifully and innovatively shot, and a moving story besides. The interior of the house alone was such an incredible set! I'd been meaning to rewatch this since moving to Indiana -- tempted to read the book as well.

Even in its studio-cannibalized form, the film holds up as a companion piece to Welles' Citizen Kane. Welles again traces the downfall of a great family, playing with themes of jealousy, pride, and progress. The film is great in its dissection of the coming industrial age. The ending falters a bit, as this is where the studio stepped in, but the film still holds power and promise.

"Life and money both behave like loose quicksilver in a nest of cracks." George Minafer (Tim Holt) was born rich and spoiled by his mother Isabel (Dolores Costello) and Major Amberson (Richard Bennett), his grandfather. Uncle Jack (Ray Collins) and his aunt Fanny (Agnes Moorehead) know something that would affect the Amberson's, inventor/entrepreneur Eugene Morgan (Joseph Cotten) and Lucy (Anne Baxter). Detailed character development, acting sensational, nicely scored and superbly written. This picture me of Magnolia and Royal Tenenbaums, flawed and tragic yet amusing to watch. Great lines on the picture: "You can never tell what will happen at all." - Jack, "In those days, they had time for everything." - Narrator (Welles), and "There aren't any times but new times." - Eugene. The …

No posts have been made on this movie yet. Be the first to start talking about The Magnificent Ambersons!