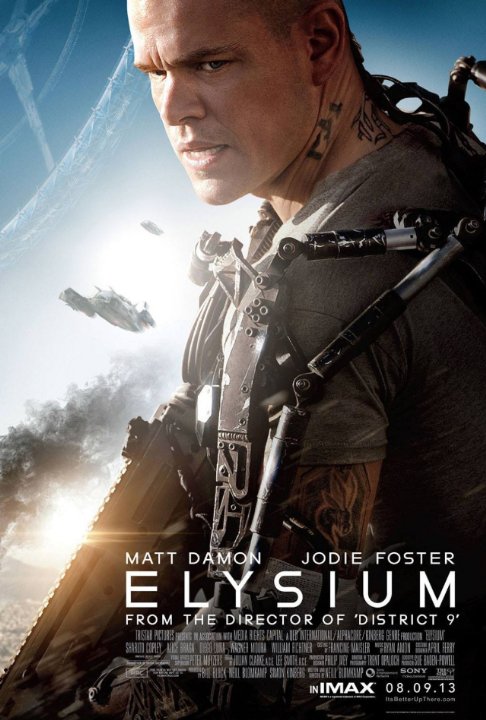 Plot: In the year 2159 the ultra-wealthy live in luxury and pristine conditions on the man-made space station Elysium while the majority of the people must get by living on an overpopulated, ruined Earth. While some work to preserve the lifestyles of rich by keeping immigration under control, others on Earth will stop at nothing to make sure equality is brought to everyone. -- Chris Kavan

Matt Damon in a robot suit that looks like a coat hanger. This movie is just awesome I mean the visual effect's are great to look at and the main villain in the movie is like the terminator if he was crazy but sadly Jodie foster was not good in the movie.

I enjoyed most of it. But, the Elysium human-made planet was pretty difficult to believe. Also, I think Jodie Foster's character should have had more scenes. But other than that, it was good.

Android : What is in the bag?
Max: Hair care products, mostly.

Lately we are getting quite spoiled in the SF area. Elysium is a pessimistic view of the future with an overpopulated earth with the known problems. Elysium is an artificial oasis of tranquility where only billionaires can buy a place to live. Each home is equipped with a "cure-bed" so that all the inhabitants can enjoy a healthy and disease-free life. The less fortunate stayed on Earth and try to survive in an unhealthy poor environment under strict supervision of droids.

You can obviously sense the paternalistic social message of the widening gap between rich and poor. It's illegal to try to reach Elysium. It makes you think of the border between Mexico and the U.S. which at this very moment people still try to cross …

Blatant political pandering disguised as a Sci-Fi film. The ruins of LA are home to a mass of under class citizens who lack basic technology to ensure their well-being. All rich and powerful have long since fled Earth for a relative utopia in orbit called "Elysium." The clear allusion to the US-Mexican relationship with regards to immigration is quite clear despite any thin attempt to conceal it. The film plays out similar to other Cyber-Punk era sci-fi such as Johnny Mnemonic, or Total Recall. Once the dialogue the villains use become apparent, the movie begins to deteriorate. There are also many, many plot holes. Why don't the residents of Elysium just send down their technology? Why can't the citizens of Earth create their own paradise? How does wiping the computer automatically give …

After the exploitation and pollution of the twentieth and twenty first centuries have reduced Earth to a ruined global ghetto, the rich and powerful abandon the planet and live in opulent splendour aboard a purpose built space station, leaving the majority of the population languishing in squalor below. Neill Blomkamp's follow up to his excellent debut District 9 is a similar blend of sci-fi action and social commentary, once again highlighting the the contrast in the lives between the haves and have nots. This time the reluctant anti-hero is played by Matt Damon whose ordinary working Joe receives a lethal dose of radiation during an industrial accident caused by an arms manufacturer with scant regard for its employee's safety. The world Blomkamp has created is a believable, and looking …

It almost comes out on my birthday (in 2013) - but it's so far out, the release date could be moved up. I have faith - Blomkamp really was a breath of fresh air - I hear he's going to continue the District 9 in sequels down the line (though Elysium is apparently an original idea and not part of that story). I'm interested to see what he can do - with Hollywood continuing to churn out mass amounts of sequels and reboots, I like people who can come up with something original.&amp;nbsp;

I am not familiar with this movie. It sounds interesting though. Looks like we have to wait a whole year though?

This is one film I won't be missing. Blomkamp really outdid himself with the brilliant District 9, and seeing as I'm from South Africa, his films are definitely in eager anticipation with me.A science fiction, with the likes of Matt Damon, Jodie Foster, William Fichtner and Michael Shanks no less, sounds like a winning recipe.