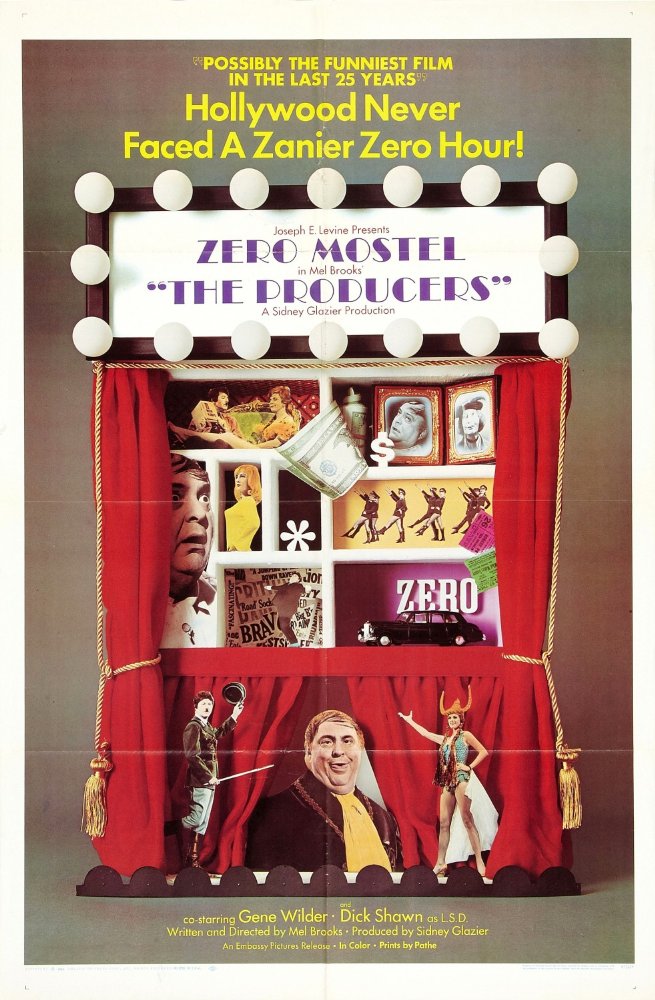 Plot: The original version of this story. Before the play and before the movie re-make. Gene Wilder and Zero Mostel try to make money by producing a sure fire flop on Broadway. -- Gabe

Incredible! It's absolutely iconic and career-defining for writer and director Mel Brooks.

The premise was dated since the idea itself is impossible. Wilder and Mostel have onscreen magic with their comedic chemistry. It had a few ludicrous characters, too idiotic worse than Dumb and Dumber. Had a few hilarious moments such as the elevator, audition and old lady climbing scenes. Most of it, in this critic's opinion, just not humorous enough. The Producers should be taken as a comedy despite its plot holes, especially the conclusion.

"The Producers" by Yojimbo

A neurotic accountant is conned by a seedy smalltime producer into helping him create a surefire Broadway flop to cheat their backers out of their money. Mel Brooks is best known for his scattershot genre spoofs, but The Producers is far more of an old school farce in the sixties tradition. Zero Mostel absolutely owns this film as Max Bialystock, the bastard child of Groucho Marx and Margaret Dumont and every moment he is on the screen is comedy gold; particularly with Wilder as his straight man. But by far the most hysterical moment of the film is the opening number of "Springtime For Hitler" which still makes me roar EVERY time! Much of the film that does not involve Mostel is rather dated (Dick Shawn's contribution in particular) and whenever he is not on the screen feels like time …

This is the original film Directed by Mel Brooks. A movie has rarely tapped into the pent up paranoia of a society like this one did. There was so much fear so much pretension during this time and here this movie comes to make fun of all of this, and leading the way is the absolutely brilliant comic mind of Mel Brooks. The plot of the movie is very simple: Max Bialystock (Zero Mostel) is a down on his luck Broadway Producer who persuades tax attorney Leo Bloom (Gene Wilder) to work with him on a play that is sure to be a flop so they can collect the investment without the intention of making a profit. The name of the musical: Springtime for Hitler.
The combination of Mostel and Wilder is amazing. While many of the jokes in this version as pretty dated, the results are still a riot. Much …

Top Films of 1968 by Neobowler

No posts have been made on this movie yet. Be the first to start talking about The Producers!