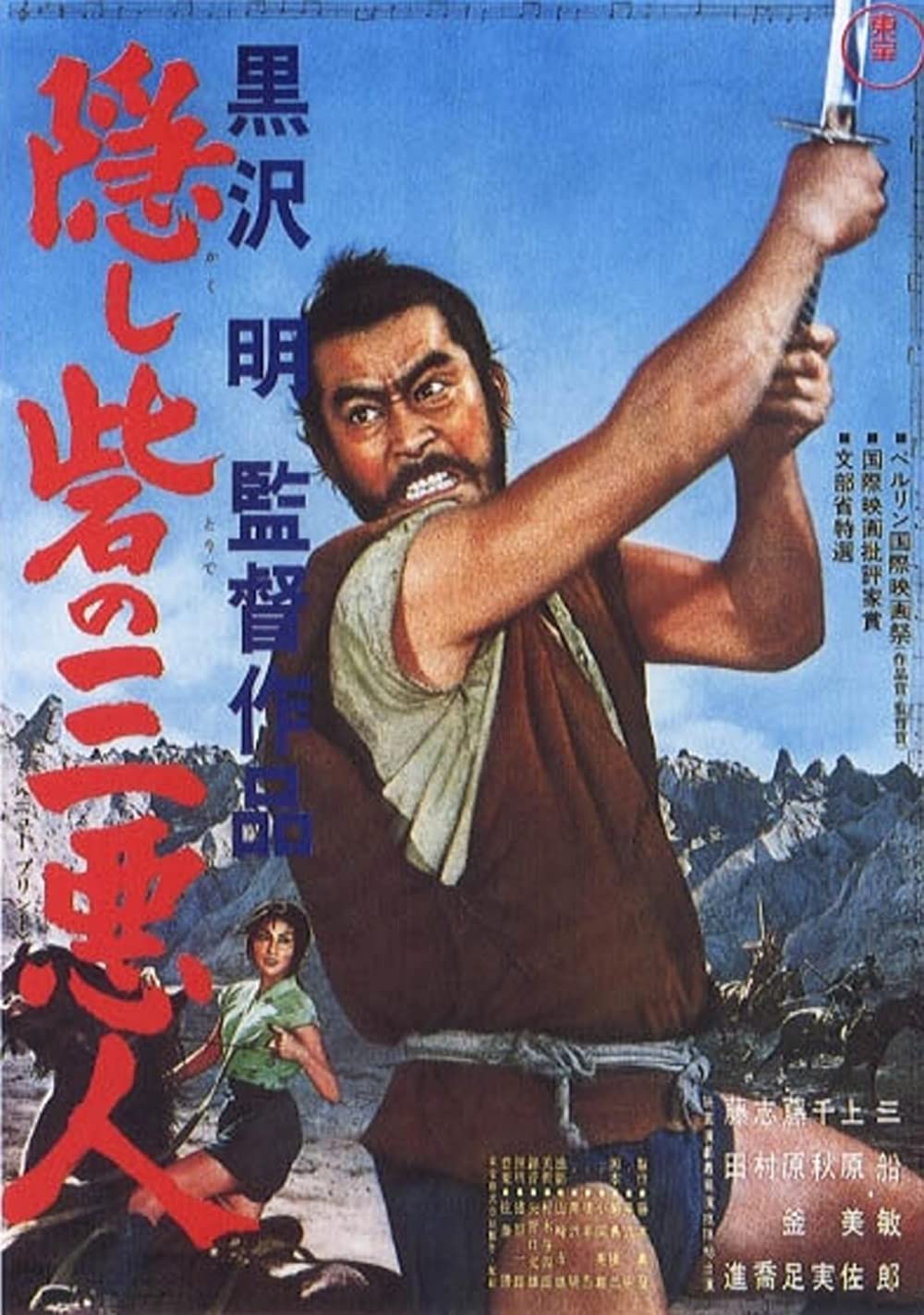 Plot: A princess and her top general travel in secret across enemy territory with a caravan of gold in hope of rebuilding her kingdom. Two greedy peasants, unaware of their origins, accompany them in hopes of getting some of their gold.

Akira Kurosawa's acclaimed epic demonstrates his keen eye for cool visuals and staging solid action scenes. It's too bad I don't really care about the characters that much. Toshiro Mifune is kind of cool as the samurai warrior safeguarding the princess (who's a real brat by the way). But the true stars of the movie are these greedy peasants who are more annoying than funny. Reportedly George Lucas was inspired by this movie to make Star Wars. That's the more entertaining version of this story by a long shot.

One of Kurosawa's best films and certainly one of his most entertaining. The film skillfully balances action sequences (see the realistic and ponderous duel scene) with lighthearted comedy. It's also fun to watch this film and point out similarities to Star Wars, since Lucas admittedly borrowed a lot from the Hidden Fortress.

A stunningly beautiful black and white movie with very high contrast and sweeping camera angles. I enjoy this movie the best of all of Kurosawa films because of the personalities of the peasants. If you look closely, you can see the beauty.

"The world is dark and this floating world is a dream." - Song from the fire festival sang by the princess. A perfect blend of comedy, action, drama and adventure. It begins with grumbling peasants Tahei and Matashichi (Minoru Chiaki and Kamatari Fujiwara). The pair was recaptured in the Akizuki castle with other prisoners. They plan on getting the princess back for a reward and discovers gold inside wood. Makabe Rokur&#333;ta (Toshiro Mifune) protects Princess Yuki Akizuki (Misa Uehara). One of the countless memorable highlights were the spear duel, fire dance and the peasants digging conversation.

Screenplay was highly strategic and entertaining such as using the double for the princess and acting greedy to enter the other clans territory. "Be honest." "Don't be greedy."- …

"The Hidden Fortress" by Yojimbo

A pair of bickering escaped slaves stumble upon the mountain hideout of a defeated general and his princess who are being hunted by the occupying army. They decide to join forces (with the added incentive of a horde of royal gold) to reach friendly territory. Hidden Fortress was probably the closest Kurosawa came to making a pure action/adventure film but he still had time to comment on the rigid class system by cleverly telling the story from the perspective of the lowliest characters. Widely acknowledged as the inspiration for Star Wars, it has also influenced a huge number of other stories including TV show Monkey, Hero and everything in between. The imagery is as gorgeous as you'd expect from Kurosawa, the characters brilliantly written and the performances all perfect, from Toshiro …

Foreign Classics I Need To Watch by James

No posts have been made on this movie yet. Be the first to start talking about Hidden Fortress, The ( Kakushi-toride no san-akunin )!