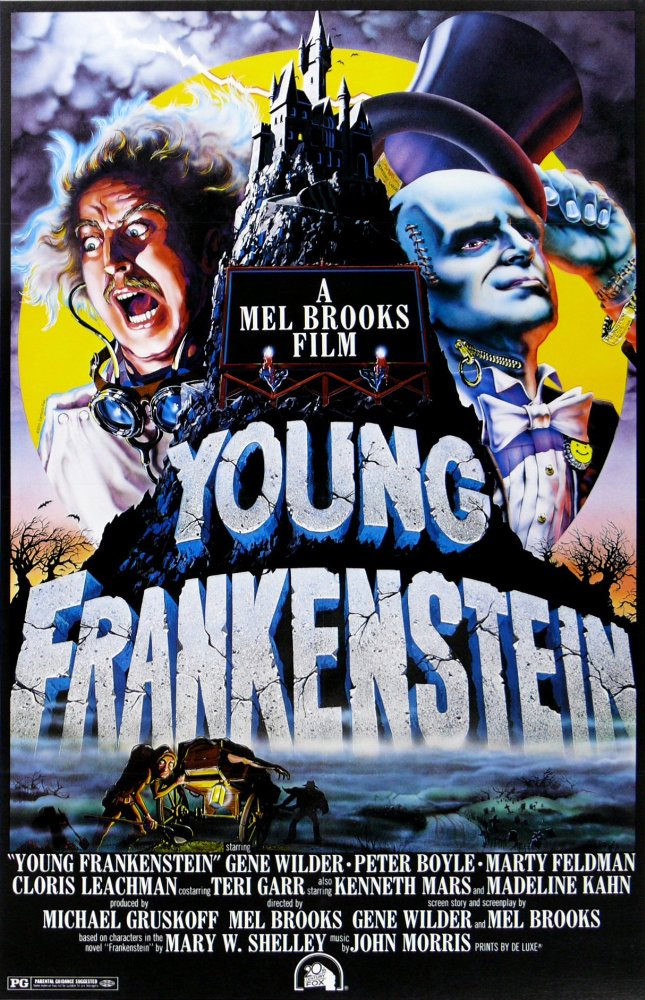 Plot: Young Dr. Frankenstein inherits his grandfather's (the famous Dr. Victor Von Frankenstein) castle - along with a few employees. Always trying to live down the family name, he changes his mind when he discovers his seemingly mad grandfather's notes on reanimation.

Hysterically funny. While The Producers" and "Blazing Saddles" cut it close, it's this "Frankenstein" parody that I say is Mel Brooks' most hilarious film.

Lending his burlesque touch to 1970s genre revision, Mel Brooks followed his hit "western" Blazing Saddles with this parody of 1930s Universal horror movies. Determined to live down his family's reputation, Dr. Frederick Frankenstein (co-screenwriter Gene Wilder) insists on pronouncing his name "Fronckensteen" and denies interest in replicating his grandfather's experiments. This was one of the best comedy classic of all time which is saying a lot.

This is vintage Mel Brooks - one of the director's very best. He finds the elusive line between lowbrow comedy and some high-quality satire and turns in a consistently funny and nostalgic sendup of classic horror films. This is a lot smarter than "Scary Movie," and understands film history quite a bit more, as well.

Dr. Frederick Frankenstein (Gene Wilder) attempts to reanimate a creature (Peter Boyle) from the dead. Frederick has an affair with Inga (Teri Garr) while Igor (Marty Feldman) and the creatures falls for Elizabeth (Madeline Kahn). A few laughable lines: Dr. Frankenstein - " LIFE, DO YOU HEAR ME?! GIVE MY CREATION LIFE!!!!" " "I am not a Frankenstein. I'm a Fronkensteen." Marty Feldman and Gene Wilder were both brilliant in portraying their characters. Igor is my favorite character, just plain hilarious. The special features were enjoyable as well such as the interviews, outtakes and more. A film of a lonely monster who just wants to live, loyalty, fidelity and creation. So many hilarious lines and moments, Young Frankenstein is unforgettable and just plain fun.

It is difficult to determine which is funnier "Young Frankenstein" or "Blazing Saddles." Both sprang perhaps full blown from the demented brain of Mel Brooks. The two also represent the apex of his creative genius. He had already done such gems as "Your Show of Shows" and "The Producers," not to mention "Get Smart" and "The 2000 Year Old Man." Following these two masterpieces, "Young Frankenstein" and "Blazing Saddles," his humor began to dry up and become even trite. Perhaps fame and fortune was too much for him. He still had a little of the spark left for "Silent Movie" and "Spaceballs." Then oblivion. Too bad. We miss the old mad Mel.
"Young Frankenstein" is basically a clever spoof of the old Universal horror flicks of the 30's and 40's, in particular "The Bride of Frankenstein," …

This is an interesting spoof coming from the 1970's; it felt intelligent, serious, and actually has a story, which is really different from the kinds of parodies that are being released today. This is supposed to be a comedy, and I laughed from here and there due to its silliness, but there were moments of real horror in this movie. I believe this picture's main tool that helps generate fear is the darkness. For instance, prior to the awakening of the monster, there was this one shot where the camera focused on its face: the shadows were covering its eyes so the texture of the face was pronounced, which resembled a recently dead body. Another noteworthy shot was toward the end prior to the monster's climb to the castle. The way it walked was menacing yet intriguing at the same time. …

No posts have been made on this movie yet. Be the first to start talking about Young Frankenstein!