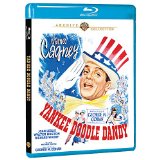 Plot: A biography portraying the life of George Cohan as it follows him through his beginning singing and acting career to further down the line when he writes and dances in his own plays.

A variety of good songs and performances. Cagney is very entertaining, in his sly comic dialogue and his talent for singing and dancing.

James Cagney completely breaks type in this bold and interesting portrayal of a vaudevillian actor-turned composer. The film itself has a good number of energetic and interesting song and dance numbers, but the biographical story itself is also fascinating and well-done.

A great musical with James Cagney. Most people don't think of Gagney as a song and dance man, but he is really good.

Yankee Doodle Dandy is a fun and thoroughly enjoyable musical biography film. All of the songs are old fashioned but at the same time are very enjoyable in their own way. The story is nothing overly special but interesting enough to get to the various numbers. Cagney is extremely good as George Cohan and does everything the part requires. I only had a few problems with namely it skips some deaths of characters that is a bit fast and a few scenes are perhaps too old fashioned namely the travel scene. Overall though it is a fun overall.

Oscar winner Best Actor James Cagney 5/5- Cagney does everything that is required in this role which has a lot of requirements actually. He sings and he dances very effectively and it is easy to see him as a vaudevillian. He acts just as well both on …

Has a Better Reputation Than It Deserves by Genco Abbandando

To be literate by mcmath

No posts have been made on this movie yet. Be the first to start talking about Yankee Doodle Dandy!