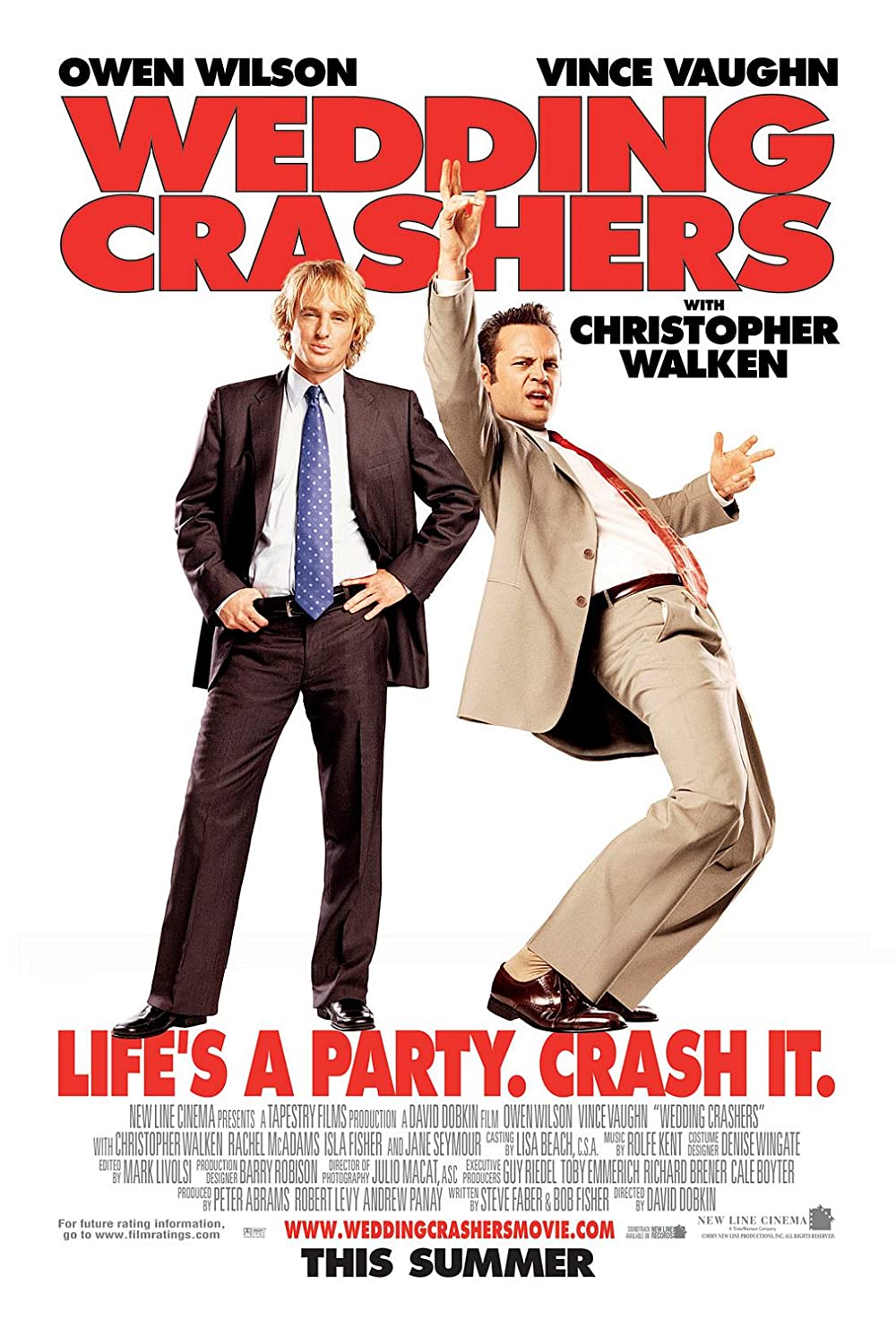 Plot: Two pals are crash weddings for free beer and women who love romance (and are lonely too) when one of them falls in love with his "victim."

More awkward than it is humorous, "Wedding Crashers" feels like a 2-hour long collection of set-ups for better, funnier comedies.

This movie was great. It is wedding movie for men. Vince Vaughn is at his best in this movie and carries the down moments back to hilarity. A the women in the movie are hot which is always a plus. P.S. Is that not the most incoherent plot description ever?^^^

Definitely a surprisingly above average comedy that thrives on the camraderie and energy of Wilson and Vaughn. Some of the supporting cast are real scene-stealers, too, particularly Jane Seymour's lecherous, out-of-character mother-in-law and Keir O'Donnell's creepy gay artist. The film's romantic subplots are a little by-the-numbers, but it's the believable on-screen friendship of the two leads that makes the film work in the end.

"Wedding Crashers" tells the story of a couple of dissolute friends who for the past ten years spend every weekend gate crashing wedding receptions and picking up bridesmaids for the purpose of lots of casual sex. And then they target the wedding of the oldest daughter of a prominent government official (Christopher Walken) and set their sights on his two younger daughters (Rachel McAdams and Isla Fisher). However, the boys cleave ways when they discover their targeted conquests are far more than they bargained for.


Their lifestyle appeals to the male fantasy of drinking, sexual partner variety, and freedom from commitment. Despite that Owen Wilson and Vince Vaughn are quite likable characters. Their interaction and playing off of each other is hilarious from the very beginning of …

John Beckwith (Owen Wilson) and Jeremy Grey (Vince Vaughn) are wedding crashers who meet women, eat free food and drinks. The two crash the wedding of the U.S. Secretary of the Treasury, William ClearyÃâs (Christopher Walken) daughter. Cleary's other daughters, Gloria (Isla Fisher) and Claire (Rachel McAdams), where John falls for Claire while Gloria gets obsessed with Jeremy. The uncouth Zack Lodge (Bradley Cooper), ClaireÃâs boyfriend, does everything to keep him away.

The dialogue wasnÃât bad for a comedy with lines such as Ãâ"I'm not perfect, but who are we kidding, neither are you. And you want to know what? I dig it.Ãâ ÃâI mean like, like a human being right now, most dangerous game." from Jeremy and Ãâ"I'm just living the dream.Ãâ" from Chaz. Had a …

No posts have been made on this movie yet. Be the first to start talking about The Wedding Crashers!