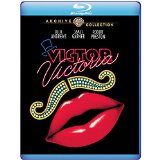 Plot: Remake of the German film Victor und Victoria.
During the depression singer Victoria finds herself at the end her tether. Then she meets Tody, who suggests a unique way to show off her talents
pretend to be a man, pretending to be a woman -- phantom

A great musical about a gender bending star and the man who doesn't buy it. Great acting, great story, and great musical numbers. One of my very favorite musicals, Julie Andrews is terrific in the lead role. James Garner is fantastic and tends to steal the scenes he is in.

British actress "Victoria Grant" (Julie Andrews) teams with gay impresario "Toddy" (Robert Preston) in 1930s Paris when he gets the idea to get work by having her portray a female impersonator. She becomes a popular act on the cabaret when she runs into "King Marchan" (James Garner), who is instantly attracted to "Victoria", who he believes to be a man in drag.

The movie is filled with many funny scenes, as well as some pretty good musical numbers. There could have been more of each however.

The performances from the main cast, and some members of the supporting cast are great. Andrews, Preston, Garner and Lesley Anne Warren stand out with their performances. Garner and Andrews especially, since they become the central characters.

There are some pretty funny scenes in this …

No posts have been made on this movie yet. Be the first to start talking about Victor/Victoria!