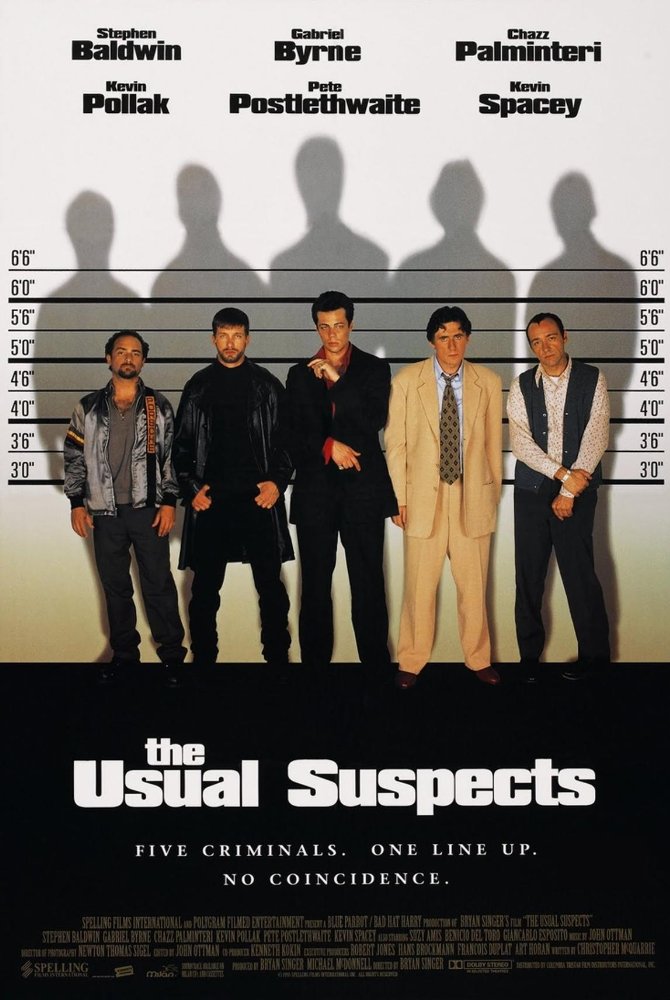 Plot: Five men are hauled into a New York jail for separate crimes but end up working together. The police are trying to get to the bottom of who blew up a boat and killed almost all of the passengers, but will they find out in time to arrest the right man?

Well written and acted, and it has one of the most unforgettable movie plot twists.

An extraordinary performance by Kevin Spacey and one incredible screenplay and Bryan Singer's direction make THE USUAL SUSPECTS one helluva thriller.

Great performances, especially from Spacey, a brilliant screenplay, and some excellent direction from Bryan Singer make THE USUAL SUSPECTS one of the most intelligently manipulative films you'll ever see. The plot is twisted and complicated, but by the end of it all, you realize you were fooled thanks to one kicker of a twist. I personally find the film hard to follow which is why I like it less than some, but the ending alone is worth seeing. One of the all-time great endings.

"The greatest trick the Devil ever pulled was convincing the world he didn't exist and just like thatâ¦.heâs gone!â

As the film opens we see Dean Keaton (Gabriel Byrne) on a ship, bodies all over the place. He looks up to see a figure standing there who he addresses as "Keyser" before he is shot. The ship explodes but there is one survivor: a cripple named Roger âVerbalâ Kint (Kevin Spacey) who tells the story of how the titular 'usual suspects' (Verbal and Keaton, plus the arrogant Todd (Kevin Pollak), the dim-witted McManus (Stephen Baldwin) and Fenster (Benicio Del Toro), got together and the events leading to the ship explosion to Agent Kujan (Chazz Palminteri), who has an ax to grind with Keaton. Agent Kujan is sure that Keaton masterminded the attack and has escaped so …

"The Usual Suspects" by Yojimbo

A group of hardened career criminals find themselves in the same police line up and decide to use the opportunity to pull a lucrative heist, little knowing that their strings are being pulled by a notoriously ruthless underworld figure. Bryan Singer's debut was a beautifully crafted crime thriller taking a lot of cues from the classics of Film Noir such as the Killing and The Asphalt Jungle using an excellent ensemble cast and ingenious plotting to keep you guessing as the plot twists and turns like a writhing serpent trying to wriggle free of your grasp. It's one of those films you wish you could see for the first time again and again but although it clearly suffers if you know the cunning twist in the tale, The Usual Suspects still has much to offer during repeat viewings. It may lack …

U.S. Customs special agent Dave Kujan (Chazz Palminteri) interrogates a crippled con man with cerebral palsy named Roger âVerbalâ Kint (Kevin Spacey) about the incident that happened in a docked ship at the Port of LA. He mentions that there were 4 other criminals, a criminal mastermind who killed everybody insight. The criminals involved in the story were Dean Keaton (Gabriel Byrne), a crooked ex police officer; Michael McManus (Stephen Baldwin), a ill-tempered thief; Fred Fenster (Benicio del Toro), McManus' partner whose manner of speaking is distorted; Todd Hockney (Kevin Pollak), a hijacker and Verbal. Everything boils down to the confession of Kintâs story, be it valid or fabricated. Certain figures were involved in his story, Kobayashi and Keyser SÃ¶ze. SÃ¶ze is an evil …

No posts have been made on this movie yet. Be the first to start talking about The Usual Suspects!