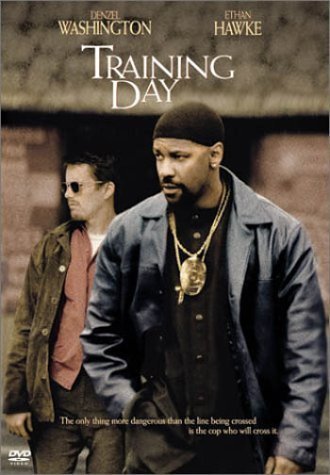 Plot: A seasoned veteran takes a rookie cop on patrol in L.A. and shows him the dark side of authority.

Foul and morally bankrupt, but these are the things that make "Training Day" anything but ordinary.

If you thought this movie is good, you should see the director's other project with Christian Bale - Harsh Times. This movie isn't as good as that one but follows a similar tale of naivety being lost in the hard street by a cop when exposed to corruption.

Good movie but could have won more Oscars.

Ethan Hawke plays a rookie cop looking to make detective by becoming part of Denzel Washington's narcotics task force. But is he teaching the rules of survival on the dog eat dog streets, or is he a psychotic and corrupt loose cannon using Hawke's inexperience for his own ends? The biggest appeal in this glossy cop thriller is seeing Denzel playing totally against his usual holier than holy type and if he'd taken more of these parts, I'd like him a whole lot more. Unfortunately it's the reliance on surface gloss that is the film's Achilles heel. If you asked a middle class 15 year old white boy what it's like to live in the "hood", this is exactly what he'd describe; basically a living hip-hop video, complete with rappers, lowriders and hot and gratuitously naked Puerto Rican babes. The …

An effective film that holds your attention throughout. Entertaining and interesting to watch the training of a narcotics cop, although unrealistic in some scenes for sure it holds your attention is acted and shot well. That is all that needs to be known because this is one best watched with just the idea of what its about in your head but not intricate plot details which help it to stay interesting.

Oscar Win Denzel Washington Best Actor 3/5- He is very over the top as the corrupt narcotics cop which works effectively enough. He does not give a deep or subtle performance but a good villain performance. He is not entertaining as some other villians in film but he still is pretty good.

No posts have been made on this movie yet. Be the first to start talking about Training Day!