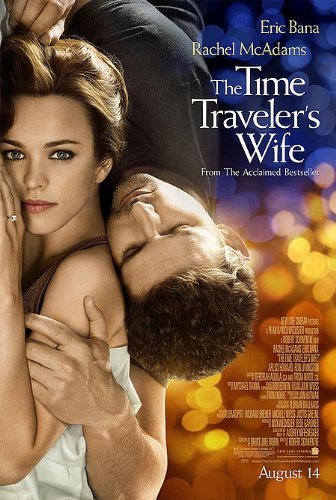 Plot: A story about a librarian named Henry who time travels involuntarily and his relationship with a woman named Claire. Based on the book by Audrey Niffenegger. -- Lulu1220

A modern age "Somewhere in Time" but with a different twist of "The Notebook." I felt there was some unnecessary dialogue that could have kept the pace of the story faster and more interesting. The two leads have on-screen chemistry and the scenes were not that cheesy for a romantic drama with a touch of science fiction elements. The dates can be confusing and its conclusion was just depressing. Themes of trust and dealing adverse situations is presented vividly. Still, The Time Traveler's Wife is worth watching especially if your married.

If your having trouble getting asleep then turn this movie on

This movie made me cry twice. It cleared up all confusion about chronology and time travel technicalities that I had when reading the book. It's a chick flick for sure. Manipulative and heartbreaking and sappy and romantic. You might not like it if you are a dude or a cold heartless girl. I thought it was pretty quality, though. Another great movie to get you laid.

Henry is a time traveler who cannot control his travelling either on past or future. His condition complicates his relationship with his wife whom he sees from her past and her future.
***
Hearing good feedbacks of this film, I thought I would be disappointed when I saw it. Finally, I saw the film and I must say that I definitely liked it! The concept was great with good execution, I never got lost on time switching as Henry was traveling back and forth on past and future. However, while watching the film, I was not really happy about the actors choice. Not because I hate Eric Bana or Rachel McAdams, but I thought there could be other actors somewhere who could portray the roles better. In addition, though there are several good twists on the film, those were all predictable. Plus, I …

Amazing movie. One of the most original things I've seen in a long long time. I don't usually like romance movies but this was really something else. It brought so much more to than just the romance. The story is excellently told, while the man is the lead it follows more of the woman's time line which really, in order to understand you'd have to watch the movie which I highly recommend. This was something I rented was I had exhausted just about all other options on new releases and had to settle for this one, I was quite surprised, definitley not what I was expecting. The acting was excellent Eric Bana was amazing, I really couldn't imagine anyone else being able to pull this off like he did. I really wouldn't classify this as sci-fi at all, it's sci-fi in the sense Benjamin Button …

Is anyone here interested in seeing this movie? Read the book? I read the book and loved it. I am always skeptical of movies based on books because the books are always better. However I will give this one a chance. Eric Bana and Rachel McAdams play the characters of Harry and Claire. It is directed by Robert Schwentke, who directed Flightplan. I cannot find a release date for this movie. It is supposed to come out this year (it was originally scheduled to come out in 2008).