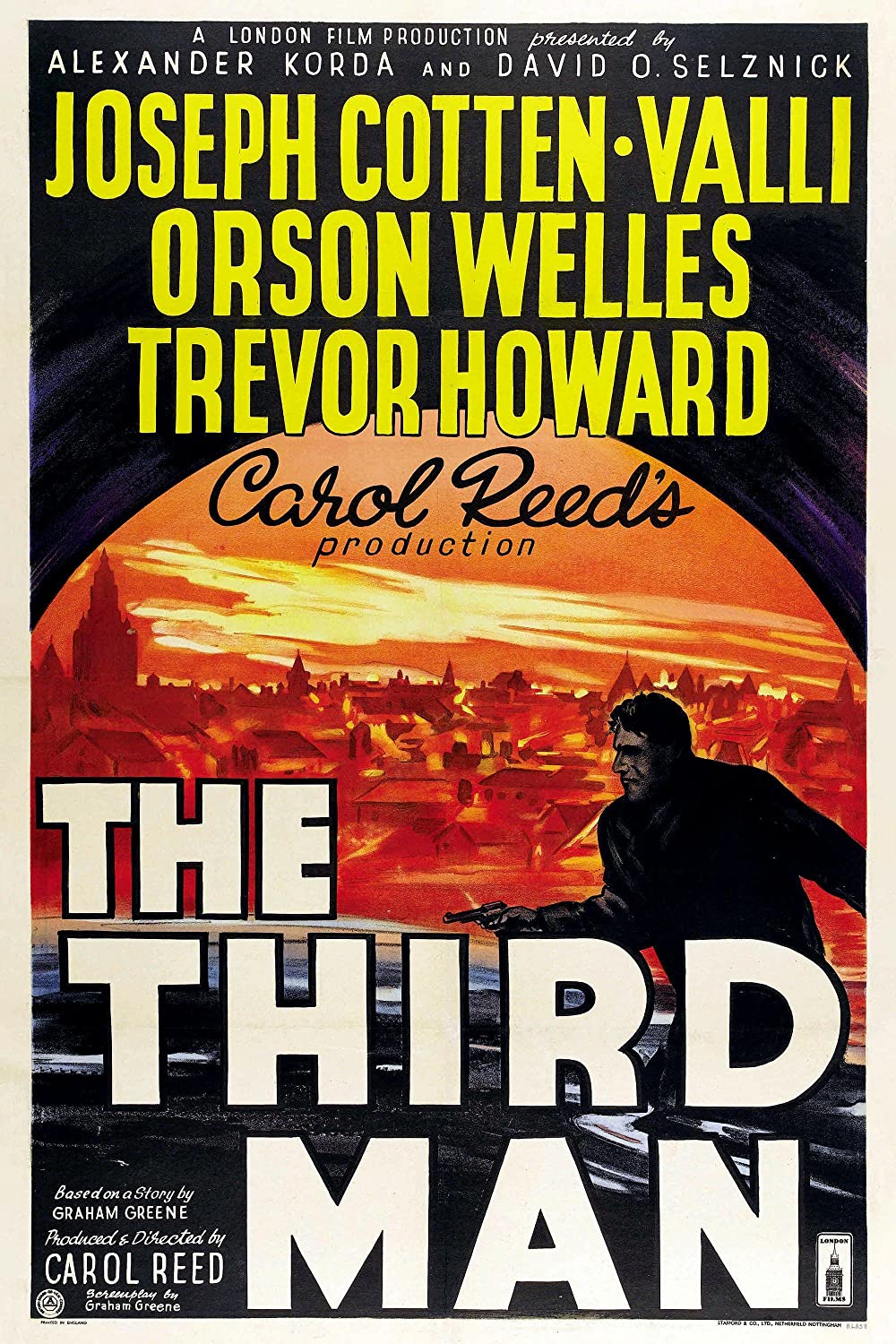 Plot: Supposedly, Harry Lime has died in a car accident. Previously he had invited one of his closest friends to join him. His friend now must find out if the story is true and the mystery behind it.

Astounding and unpredictable, "The Third Man" remains an influential bit of noir and espionage.

The mystery unfolds in a natural, subdued suspenseful manner. The main twist past the middle of the story is sort-of given away by the fact that Orsen Welles is the top billed actor. However, that doesn't ruin the outcome or the film's overall effect. This is a tightly wound thriller that entertains from beginning to end. Welles gives one of his most dark and memorable performances.

Writer Holly Martins (Joseph Cotten), a friend of Harry Lime (Orson Welles), sees Anna Schmidt (Alida Valli) to get some information about Limeâs death. Major Calloway (Trevor Howard) searches for evidences of the murder and questions Anna. Holly meets Harry in a secluded Ferris Wheel. The score was repetitive which makes you feel sleepy and the simple plot was not as engaging. Its conclusion was the best part of the film. The Third Man is a watchable mystery not even close to the brilliance of Citizen Kane.

Harry Lime: "Don't be so gloomy. After all it's not that awful. Like the fella says, in Italy for 30 years under the Borgias they had warfare, terror, murder, and bloodshed, but they produced Michelangelo, Leonardo da Vinci, and the Renaissance. In Switzerland they had brotherly love - they had 500 years of democracy and peace, and what did that produce? The cuckoo clock. So long Holly".

The Third Man is about Harry Lime who has died in a car accident. Previously he had invited one of his closest friends to join him. His friend now must find out if the story is true and the mystery behind it.

The Third Man or best known has Orson Welles second best movie with Citizen Kane still at number 1. This time Carol Reed takes the directing chair and not Orson Welles but I got to be honest …

"The Third Man" by Yojimbo

A down on his luck pulp novelist arrives in post war Vienna on the promise of a job from an old friend, only to find he has been killed in a car accident. Convinced of a conspiracy, he investigates. Graham Greene's adaptation of his own novel has a hell of a lot to commend it; an intriguing mystery set in beautiful locations, with some gorgeous cinematography and full of wonderfully framed shots by director Carol Reed. Cotten makes an interesting departure from the usual Noir protagonist, both a fish out of water AND out of his depth. Trevor Howard is also great as the officious British investigator and Alida Valli is a beautiful, vulnerable yet complex love interest. It has only one flaw for me, but it's a near fatal one. The soundtrack is so intrusive and inappropriate it almost wrecks …

My Top Movies of 1949 by Indyfreak

No posts have been made on this movie yet. Be the first to start talking about The Third Man!