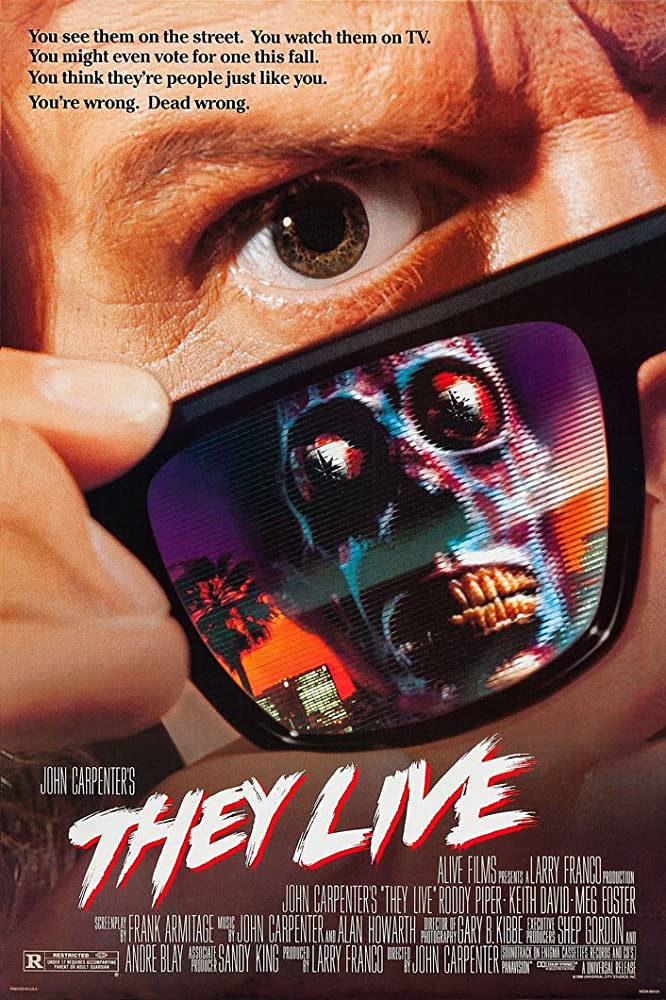 Plot: An unemployed construction worker heads to L.A. for work. When he puts on a pair of innocuous sunglasses, he finds out the world is not what it seems.

It's a good movie, but it's a bit underrated.

Ah, this movie is so good. I wasn't one of the lucky people that got to see it growing up, actually I just finished watching it a few minutes ago and I have to say I am impressed. The movie is every bit as old as I am, but it still manages to be entertaining and does send a good message, or at the very least sends A MESSAGE even in 2012. With stars like Roddy Piper and Keith David this movie has to be good and I stand by saying that it's one of the only "B" movies I can actually stomach, well this and "The Blob". I give it 3 out of 4 stars.

A typical B flick/that can b a dark comedy at time that is provocative, action packed and funny. Roddy Piper showed some earnest acting and just fits the role of Nada. " Fascinating how the humor was so effective despite the seriousness of the situation. Special effects and wardrobe may seem dated, but the messages of consumerism, fascism, greed and trust. Frank and Nadaâs fight sequence was very authentic and screenplay just exceptional. Some memorable lines: The name of the game is: Make it through life." "Everybody got their own hard times these days." "We are only focused on our own gain." and âWeâll do anything to be rich.â Overall, an entertaining look at how humanâs would do to gain richness even when they are stepping on their own kind. Very much familiar in this …

"They Live" by Yojimbo

An out of work construction worker drifts into town and stumbles upon an alien conspiracy to drain the planet of its wealth and enslave the disenfranchised lower classes. If George Romero's Dawn Of The Dead contained a commentary on consumerism and greed then They Live is a full frontal assault! The decidedly left slanted script pulls no punches as everyman Roddy Piper discovers a pair of sunglasses that reveals a subliminal message transmitted through the TV to keep us docile and advertising as little more than slogans stating "OBEY" "DO NOT QUESTION AUTHORITY" and "NO INDEPENDENT THOUGHT"; even money itself boldly proclaims "THIS IS YOUR GOD"! Carpenter's hatred of corporate corruption and greed is barely disguised but his real venom is for those who would sell out their own for a few …

Although his career has faltered in recent years, John Carpenters name will forever be associated with classic cult movies.
Any inspiring director would be proud of a C.V that included Assault on Precinct 13, Halloween, The Thing, Starman, The Fog and his vastly underrated Sci Fi B movie, They Live.
A subversive and highly inventive satire which seems to be more relevant now than it was 20 years ago, They Live is possibly Carpenters last great film.
Lampooning the government, corporate greed and embellishing the divide between the "haves and the have not's", They Live also features almost certainly the greatest punch up in film history.
Roddy Piper in a role he was born to play chews the scenery and has excellent support from the ever reliable Keith David and Meg Foster.
All in all, …

No posts have been made on this movie yet. Be the first to start talking about They Live!