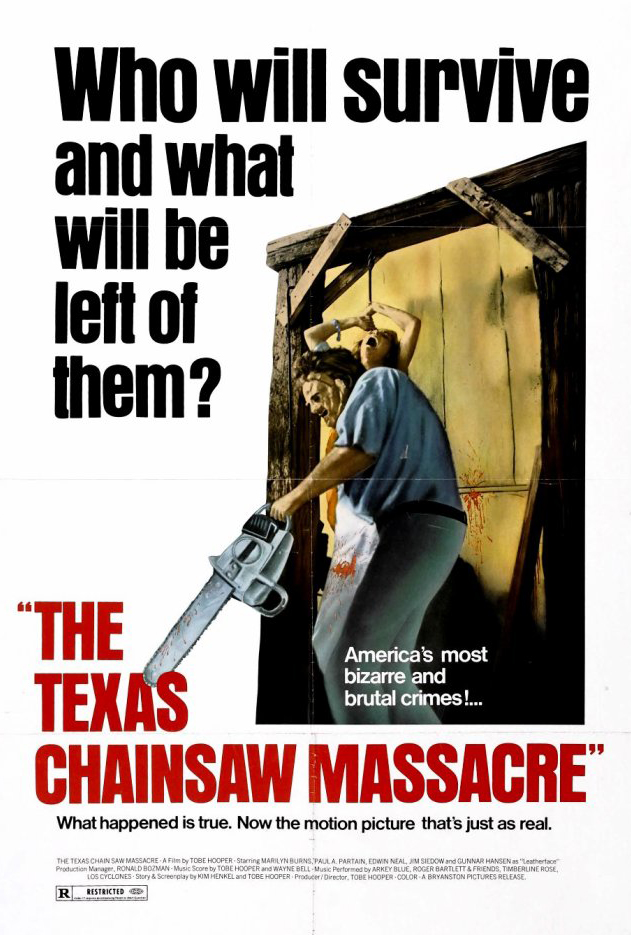 Plot: A group of five friends travel through rural Texas when they pick up a strange hitchhiker. Things go from bad to worse when they end up at an old farm house that is home to a cannibalistic family.

Gruesome, yet unexpectedly artistic, the original "Texas Chainsaw Massacre" was ahead of its time in terms of teen slasher horror, making it so deservingly influential.

Old Man: "Look what your brother did to the door!". This movie made me feel dirty and unclean deep inside of me, which is what the movie is about. A gruesome look at the dark side of the world. The movie does hold anything back it just goes for it, making this movie a gritty horror flick with strong and hard to watch gore scenes.

The movie that made a town come to life or death rather. Lower budget but instant classic. A must for horror lovers, this is a older movie so the young may find it boring, and if so the remakes will be better for you.

A gruesome film inspired by the crimes of real-life murderer Ed Gein. Sally Hardesty (Marilyn Burns) and her paraplegic brother, Franklin (Paul A. Partain), travel with three friends, Jerry (Allen Danziger), Kirk (William Vail), and Pam (Teri McMinn) visit Sally's grandfather's grave. The editing could have been improved and appropriate character background would have been nice. The sound, settings, props and acting were solid to make it horrific. Surprisingly, some of the dialogue was provocative for its genre, "There are somethings you gotta do. It don't mean you gotta like it." - the proprietor/cook (Jim Siedow) "Everything means something, I guess." - Sally. Overall, The Texas Chainsaw Massacre falls short if done today since it's light plot doesn't entertain much except for …

"The Texas Chainsaw Massacre" by Yojimbo

A group of friends on a road trip unwitting stumble into the lair of a chainsaw wielding psychopath. Celebrated as one of the all-time horror greats, Texas Chainsaw Massacre is more an exercise in the macabre than outright gore. In fact, there is very little in the way of blood and guts and the murders happen swiftly and without gruesome detail. The reason that this film is so unsettling is the way that Leatherface is so matter of fact about it all; despite the fact that his victims are pretty girls, he has no interest in molesting them in any way. They are just meat, pure and simple. He basically treats human life with no more respect or reverence than any other animals and the constant references to slaughterhouses and the furniture and trophies fashioned from bones of all kinds, …

It has been thirty-five years since The Texas Chainsaw Massacre left its indelible mark on the horror oeuvre. Tobe Hooperâs only (arguably) great contribution to the genre hasnât lost any of its potency. The overt sadism in The Texas Chainsaw Massacre is enough to make Eli Roth blush. Sequels have come and gone, and a remake was made, but no one has been able to match the formula of gore, thrill, and sheer terror of the original. A groundbreaking film in many aspects, the purity of its violence has paved the way for films like Hostel, Saw, and any of the recent films with overt or gratuitous violence and gore. The Mockumentary aspect of the film has laid the groundwork for The Blair Witch Project, Paranormal Activity, and innumerable lesser films. Keep in mind that some people …

No posts have been made on this movie yet. Be the first to start talking about The Texas Chainsaw Massacre!