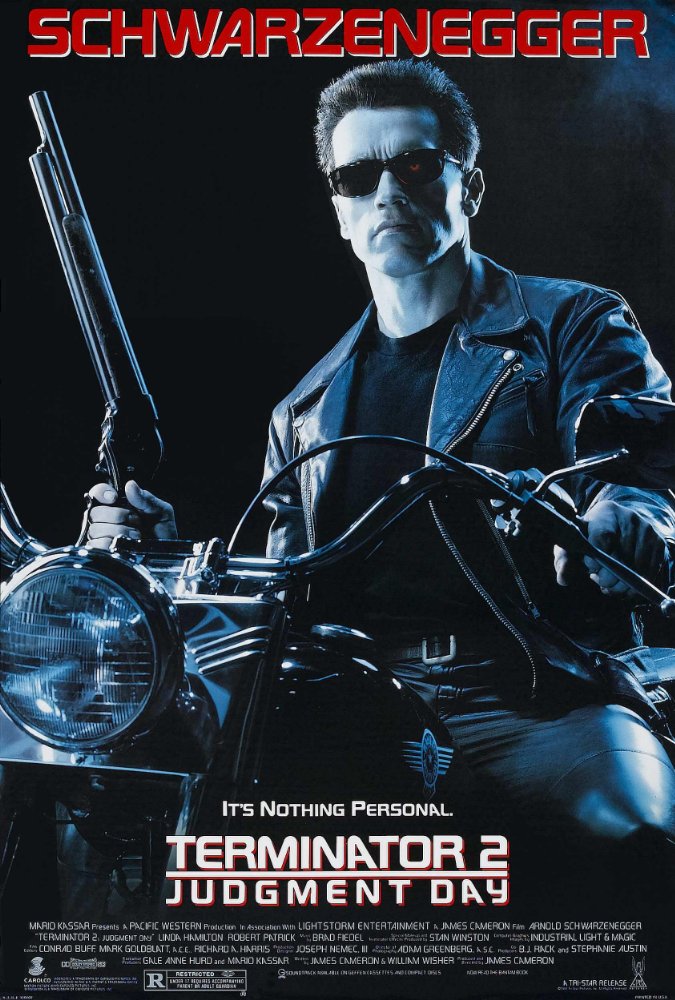 Plot: John Conner is protected by an outdated cyborg who fights a liquid metal cyborg in the continuing story of the future and the past.

Bigger, badder, and above all, better, "Judgment Day" sets an example of how a sequel should outdo its predecessor.

A masterpiece which created an entire genre of sci-fi action films. This was "THE" movie of the 90's. The impact this film had is immeasurable. Just like the crushing, unstoppable theme music, this movie is relentlessly thrilling.

Just saw special 3D showing of T2, oh yeah. 3D wasn't needed, as it didn't really add anything. However, re-watching this on the big screen was a pleasant experience. It washes out the horrible taste both sequels/prequels left behind to this once great series.

As of today, "Terminator 2: Judgement Day" is 25 years young, and note the word "young" due to the fact that the film holds up so well even to this day. This is precisely how to make a sequel compelling. Take the main characters, from a decent science-fiction/action film from the eighties, to a completely new level of development.

The movie has incredibly great performances from all the actors. I have to really hand it over to Edward Furlong for nailing his first acting role as John Connor. John Connor is a completely believable teenage character because of how well-acted he is. Robert Patrick's character as the T-1000 is revolutionary because the way he morphed into other people's appearances still holds up like a modern film. I really love the way Arnold Schwarzenegger plays the …

Along with Aliens, James Cameron has been responsible for two of the most inventive sequels around. This follow up to his own sci-fi classic The Terminator sees another sent back through time to protect John Connor in childhood from a shapeshifting assassin bent on preventing him from leading the human race to salvation. It puts an interesting spin on the original concept, essentially switching the roles of Arnie and Sarah Connor (Linda Hamilton turning in easily the best performance); he becomes the nurturing parental figure, she the emotionless, singleminded terminator who only regains her humanity when shown the human face of her target. Throw in a nice time paradox, some excellent set pieces and innovative effects and you have a great cocktail for breathless action sci-fi. The one …

One of the best sequels created. Linda Hamilton (Sarah Connor) did a great job in being a heroine, Edward Furlong (John Connor) effective bring in the comic relief and drama. Arnold also portrays a believable lower model Terminator while Robert Patrick was stone cold as the T-1000. Has a very cool soundtrack, catchy dialogue and amazing action sequences that were innovative. Not only does it have stunning visual effects, it boasts its theme of maturity, sacrifice/value of human life (T-800) trust (John) and respect (Sarah's point of view). The loaded special features will not disappoint as well. Pace of the film never runs down and you keep waiting for the next scene to unfold. One of the best quotes on the film from Sarah Connor - "The unknown future rolls toward us. I face it …

No posts have been made on this movie yet. Be the first to start talking about Terminator 2: Judgement Day!