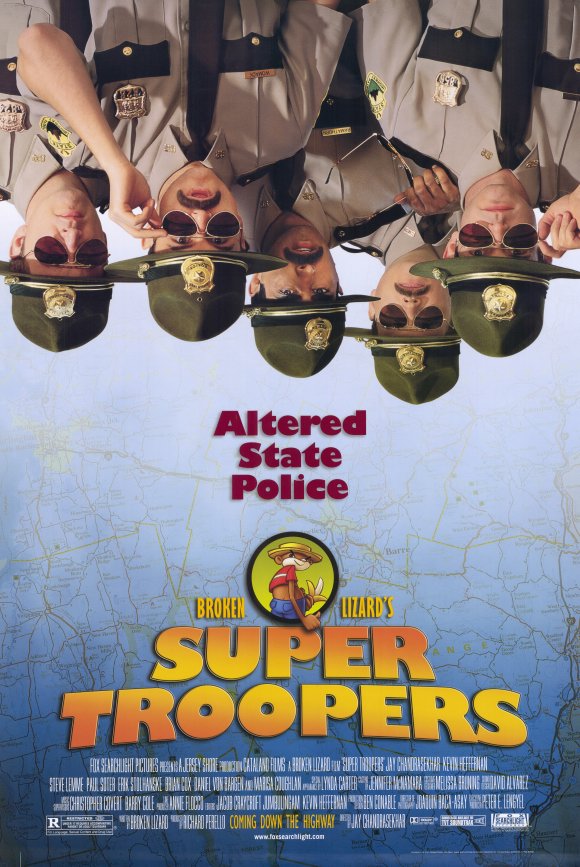 Get's better everytime I watch it. I adore the acting, the setting, the plot and the shenanigans. Not my normal fare but hilarious nonetheless. Without a doubt my favorite part of the movie is the opening.

This movie is perfectly executed with the plot and actors it was given. It is one of those cheaply made comedy movies. It has its cheap laughs, but it doesn't matter because the characters make it work. I am surprised there hasn't been more comedy movies about a whole station of standard police. It is a fresh alternative to the comedy detective movies. It was hilarious and make you think to become a cop. A must-see for all.

Riding high on the improvisational skill and natural chemistry of the Broken Lizard comedy team, Super Troopers is a pleasantly funny and often smartly satirical look into law enforcement. It's sort of a raunchier, more updated version of Police Academy, but, in my opinion, much funnier.

This rater never laughed so hard since Old School. It is such a rarity these days where a good story/script can make a comedy effective since it seems the hallmark today is having a popular star. In this critic's view, comedy would be the most difficult to review/rate since its easy to make somebody cry or think, but it's hard to make somebody laugh, especially when playing cops. The idea may have not been realistic and the picture of Spurbury Police Department against Vermont State Troopers was ludicrous. Still, it was difficult to resist the zany characters of the strategic Arcot "Thorny" Ramathorn (Jay Chandrasekhar), explosive "Rod" Farva (Heffernan), prankster "Mac" Womack (Lemme), playful rookie "Rabbit" Roto (Stolhanske) and loverboy Jeff Foster (Soter) led by Captain John …

No posts have been made on this movie yet. Be the first to start talking about Super Troopers!