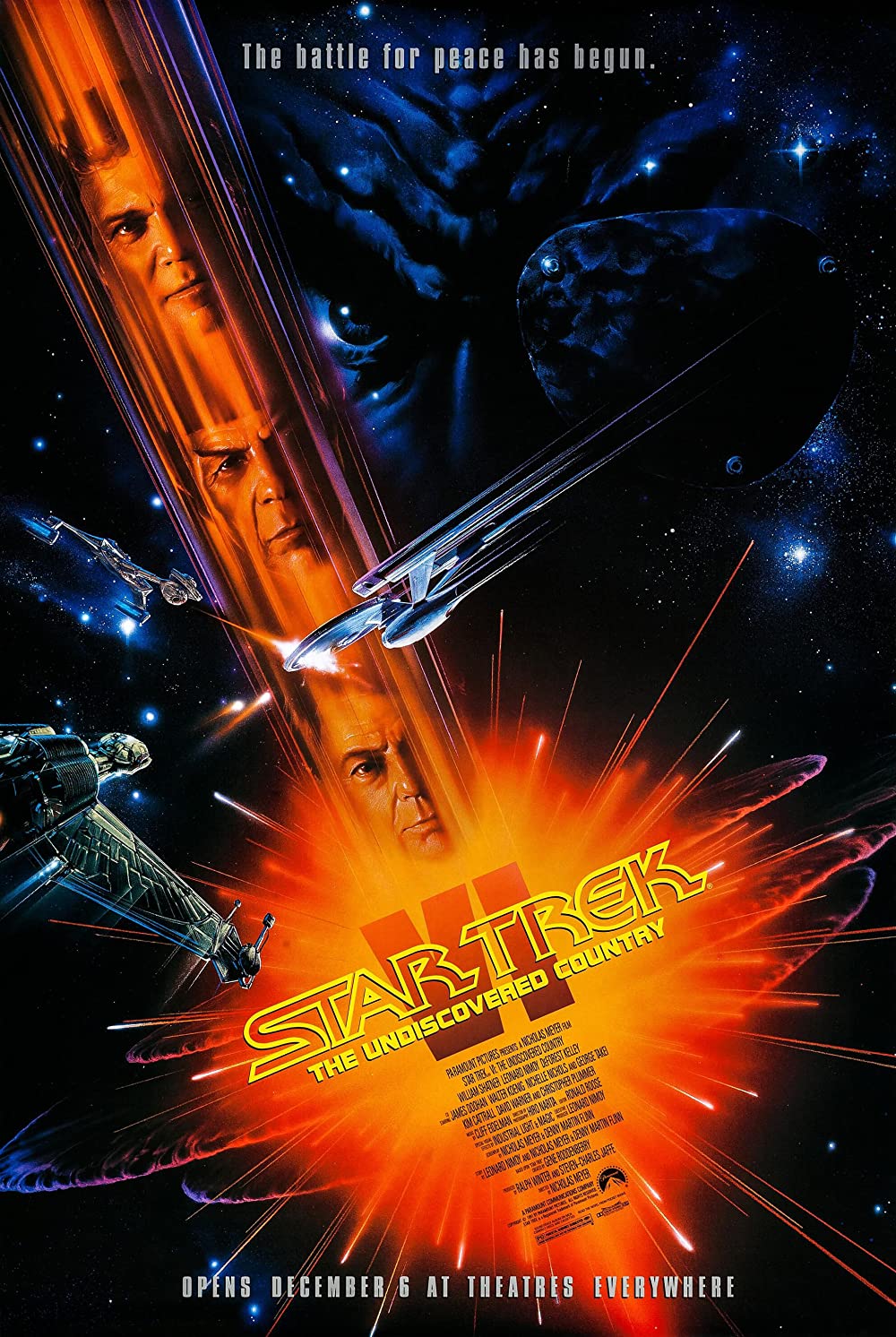 Plot: Kirk and McCoy are accused of assassination while the Klingons and Federation are negotiating for peace. -- DB

Not a bad film by any stretch, it just doesn't compare to some of the others in the series. The plot is the weak point here, it seems as though it could have just been a regular series episode rather than a full-length feature.

It's nice to see the crew of the Enterprise winning the Cold War. Iman was really hot as that shapeshifter and Christopher Plummer hits a home run as a Shakespeare quoting Klingon general. Seeing Sulu in command of the Excelsior (last seen getting left behind in Star Trek III) is quite a cool sight.

Captain Kirk and Bones are arrested for the assassination of the Klingon Chancellor during a diplomatic mission and so Spock and the rest of the crew of the Enterprise set about proving their innocence and preventing the outbreak of war. Very much preparing the ground for the crew of The Next Generation, the sixth instalment of the Trek franchise is a far more po-faced affair than the high camp previous offerings. The knockabout charm and self-deprecating humour that was the hallmark of the series is glaring in its absence, leaving us with a rather workmanlike and sterile cold war style sci fi thriller. The plot is simplistic and cliched, the effects are variable at best and the amusing banter between the crew mates is replaced by tedious soul searching. There's even little in the way of …

Most underrated of the series.

It's really starting to become difficult to find a lot of negatives about the better films on the list, but for one, out of all 11 movies in the series, this one feels the least like a Star Trek film to me. Maybe it's the color scheme or the writing, or the enhanced makeup and effects, but for me, it looks more like another 90's sci-fi film, and less like another Star Trek film. Other than that, this film runs low on the jokes and the jokes that are in it, are pretty forced and usually unfunny (especially a moment in which Shatner kisses an alien who eventually morphed into looking exactly like him, in which the original Kirk says "I can't believe I kissed you." and the alien responds "Must have been your lifelong ambition. "...ha?

I think of all the directors of the Star Trek series, …

The final film to star the original STAR TREK cast is also one of the series' best, ranking up with II, III, and IV. Nicholas Meyer, who helmed WRATH OF KHAN, returns to the director's chair, and ILM returns to the visual effects department. Best of all, the entire cast give their best performances ever (in particular, Christopher Plummer's portrayal as a devious Klingon general is a treat). The surprisingly intelligent and strong plot involves an uneasy attempt at peacemaking between the Starfleet Federation and the Klingons. Things get ugly when a Klingon ambassador's ship is attacked, leading to a horrifying murder. Kirk and Dr. McCoy are unjustly framed, so it's up to the rest of the crew to prove their innocence and uncover the real killers before another person is killed. What's …

No posts have been made on this movie yet. Be the first to start talking about Star Trek VI: The Undiscovered Country!