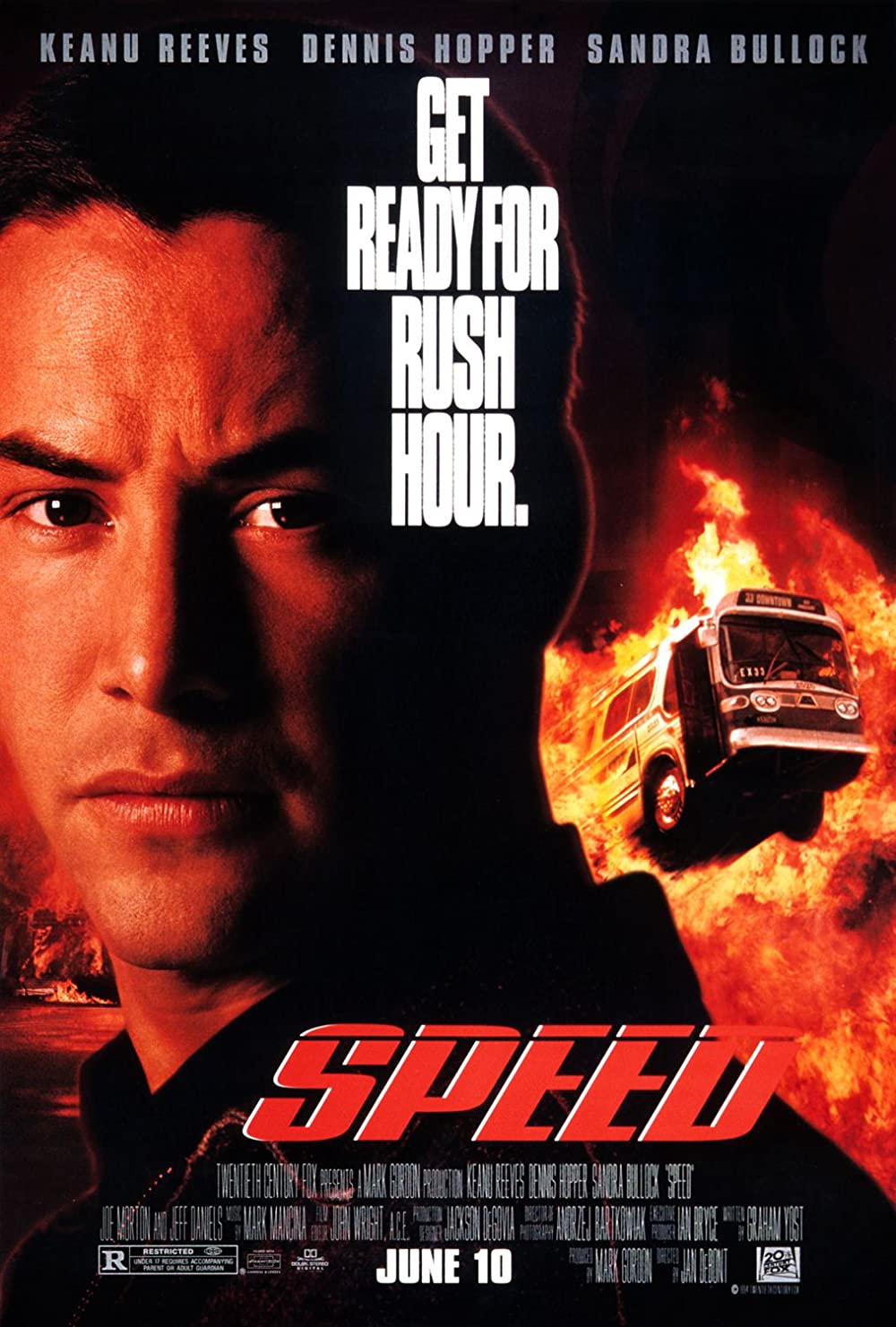 Plot: An L.A.P.D. swat team specialist must prevent a bus from going under 50 miles an hour or a bomb planted on board by a man bent on revenge will explode.

Speed great movie from the 90's i wish they would make more movies like this and Die Hard.

This movie did a great job making a thriller out of one setting, a bus. It was wild and seat-grabbing ride that was different from any thriller I know of from that time.

This is a slickly-directed and adrenaline-fueled thriller that builds a tense atmosphere that it never relinquishes. Dennis Hopper is perfectly cast as the mad bomber and Sandra Bullock demonstrates her magnetic energy and charm early in her breakout role.

(R.I.P. Dennis Hopper), A great action flick with so many good things and less Bad things. the villain in the movie was fun to watch on screen I mean he was pulling off words like "Come on hero are you ready to be a sucker for sliver", the movie has great visual effect's and Sandra Bullock was one her prime in this movie and Keanu Reeves is not a great actor but he does a good Job as playing the main Bad-ass in the film. Jeff Daniels was in the movie he Did a fine Job as well in the movie, But the one thing that I could not stand and that is that the movie goes a bit unreality with the bus flying in the air landing on it's feet like a cat but in real life the bus will tip over and crash and that's really it the movie itself is great and if you have no see the movie yet please watch it. …

Keanu Reeves stars as the courageous Officer Jack Traven, a police officer who is caught up in a deadly game with Howard Payne (Dennis Hopper) after foiling a hostage situation involving former Atlanta cop and an elevator full of victims. Now Payne has placed a bomb on a city bus, and if the bus drops below 50mph or lets anyone off, it will explode. When one of the passengers accidentally shots the bus driver a cute passenger Annie (Sandra Bullock) who just happened to be taking the bus because her license was revoked for speeding takes over the bus.

Jack has to do his best to keep the passengers calm until the SWAT Team finds out who this mysterious mad bomber is before they run out of gas or worst, get blown away. Jeff Daniels does a terrific job as Det. Harry Temple, Alan Ruck is …

A retired Atlanta bomb squad sergeant Howard Payne (Dennis Hopper) places a bomb on a city bus that Traven boards. Payne instructs Jack Traven (Keanu Reeves) to keep moving above 50 miles per hour or the bomb will explode. The bus driver was gets injured so Annie Porter (Sandra Bullock) takes over the wheel while Jack tries to dismantle the bomb. The overall premise was original and pace was good since the story kept moving. Only reservation this critic has is its believability of how the bus kept going above the mentioned speed for a long period of time. Screenplay was not that impressive but camera work was fascinating. Sandra Bullock was fabulous and her character just likable. Dennis Hopper's noteworthy portrayal was likewise good. Speed is a wonderful thrill ride that …

No posts have been made on this movie yet. Be the first to start talking about Speed!