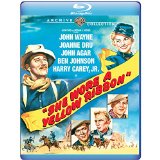 Plot: In the 19th century a man is retiring from the U.S. cavalry in a few days. But first, he must escort a family to another fort. -- sapien

The racism in this movie was thick throughout most of the scenes with the Native American characters. It even managed to glorify the confederacy. In addition, even if it did not have so much racism it would still be a sub-par movie.

One of John Wayne's best Westerns, a film that strikes a chord between sentimentality and some serious Western action. John Wayne isn't over the top here, as he sometimes was in later films, and comes across as humble and genuine.

"She Wore A Yellow Ribbon" by Yojimbo

A retiring cavalry officer encounters fierce resistance from the united tribes on his final patrol and must find a way to prevent a costly war before he leaves the service. John Ford and John Wayne made many classic westerns together, but this - the opening chapter of their "cavalry trilogy" - is not one of the better examples. That is not to say that it is without merit; Wayne's portrayal of a world weary retiree is far more subtle than the self-parody he would become in later years and he strikes up an amusing buddy partnership with boozy sergeant Victor McLaglen. But it shows none of the scope of their best work; the plot is little more than a series of sorties on horseback and there is little attention paid to the characters and motivations of their enemies. In fact the one scene in …

My Top Movies of 1949 by Indyfreak

No posts have been made on this movie yet. Be the first to start talking about She Wore a Yellow Ribbon!