Shaun of the Dead Movie Information 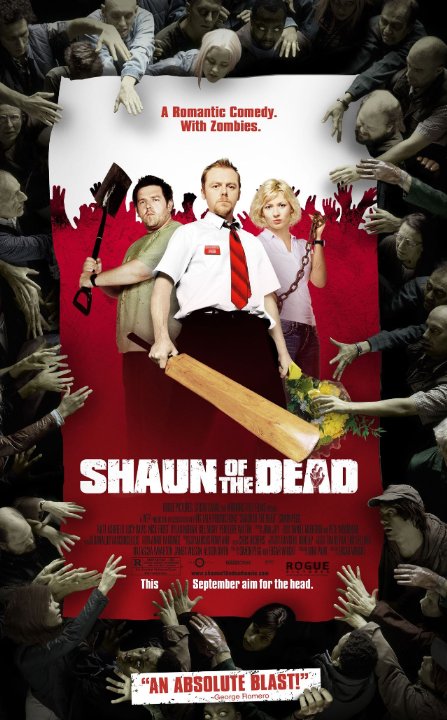 Plot: A man needs to sort out his life: with his girlfriend, his mother and step-father, his job and his best friend. Oh, and the recently deceased are now rising from the dead and trying to eat everyone.

Featuring some of the most brilliant and laugh-out-loud funny satire ever put in a horror-comedy, "Shaun of the Dead" is simultaneously in a league with both Monty Python and the social critique zombie films of George A. Romero.

"You've got red on you". The jokes in the movie was funny and clever and the writing is well made and the movie is a blast to watch.

Shaun of the Dead is an amazing mix of horror and comedy; a movie so clever and hysterical you can't help but give in and enjoy it for exactly what it's trying to be. It's an expertly directed and acted film, with a rousing climax both exciting and moving. I can't find a single thing wrong with it. This film represents a highlight in the careers of director Edgar Wright, Simon Pegg, Nick Frost, and everybody else involved.

What's the matter? Never taken a shortcut before?

So, since The World's End is released in cinemas this week, O thought I would talk about one of my favorite director's and his awesome first film: Shaun of the Dead.

Who thought that the Three Flavors Cornetto movies would climax as one of the best trilogies of our time? That's right, I loved the World's End, but more about that later.

Shaun of the Dead mocks just about everything. Britain, tea, room mates, pubs, beer, relationships, zombies and the zombie apocalypse.
There is not a minute in this movie that goes by without some form of incorporated comedy, mainly due to the acting by Simon Pegg and Nick Frost and the direction by Edgar Wright.
These guys know how to make a movie everyone will enjoy. The movie is full of inside jokes which makes it compatible with comedy lovers' …

Flesh-eating fun for the whole family!

What do you do when Zombies attack? Throw Sade records at them, of course and beat them off with a cricket bat!

A zombie epidemic takes over London, and recently dumped shop assistant Shaun (Simon Pegg), with his slob roommate Ed (Nick Frost) who doesn't have a job, plays video games nonstop and sells weed have to stay alive, save Shaun's mum, his ex-girlfriend and do their utmost to stop the lumbering undead from breaking through the walls of the Winchester, a local pub of questionable repute and feasting on their flesh. But Shaun, armed with a cricket bat, is determined to save the woman he loves and nothing is going to get in his way!

The plot rips along beautifully and parodies the zombie genres. Shaun's dry wit of the situation makes the viewers able to laugh so if you are …

"Shaun Of The Dead" by Yojimbo

Ambition-free retail manager Shaun thinks that being dumped by his girlfriend is the end of the world, until next morning when he wakes up to find that the dead are walking the earth. Brought to you by the same team who brought you Spaced, Shaun Of The Dead is a knowing homage to George Romero's Dead trilogy in which a zombie holocaust is seen through the eyes of a London slacker. Much beloved by many, this film is a bit of a case of rose-tinted memories; the highlights are actually hilarious, but there are rather less of them than you'd think. In fact most of the really funny lines happen in the first half hour, before the bulk of the zombie action when the Pegg and Frost double act are in full effect. The idea does run out of steam somewhat for the final half hour but when it's funny, …

No posts have been made on this movie yet. Be the first to start talking about Shaun of the Dead!