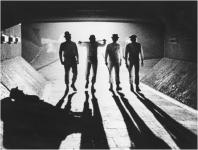 Movie Quotes: Now, where was I?

I thought such unconditionally optimistic characters like this only existed in fairy tales such as Enchanted, but alas I was wrong. We have seen boatloads of cynical bastards in movies so why not the complete opposite. Being a die hard pessimist myself it was interesting to see how the other side lives and surprisingly I didn't feel like choking anyone. It's usually those downer, I have so much to over come performances that get all the praise so it's unfortunate that Sally Hawkins will ultimately be overlooked for this memorable role as the perpetually cheerful Poppy. It was delightful to spend two hours in her company.

I am just curious to know if you have any recommendations for placement of these links so that people will use them more? Thanks for the input as I am sure it will make the site better.

I have a question for you - we are doing some user testing and I curious to know why you didn't use the filmcrave &quot;attach review&quot; link instead of copying and pasting. It doesn't matter to me why, but we have noticed that not many people have been using these attach link features. Any comments you have would be greatly appreciated.

This is a great review. How do you feel it compares to his other two flicks? Also, you should post this review to that forum topic (the one you and I were talking on) :)

I added it. Feel free to add the plot too since not much is known.

Taken has been added...

You've finally come to your senses and saw that monster movie for what it was. Now I can no longer be secretly ashamed.

&quot;I thought the rating system was based on a specific set of rules.&quot; Hahahahaha. Wow.

Did you just use the word 'microcosm' in reference to a Will Ferrell movie?

I didn't realize in order to be a 'R' rated movie, you have to try to push boundaries. I thought the rating system was based on a specific set of rules.

If you were already tired of Will Ferrell's shtick why did even go see this movie?